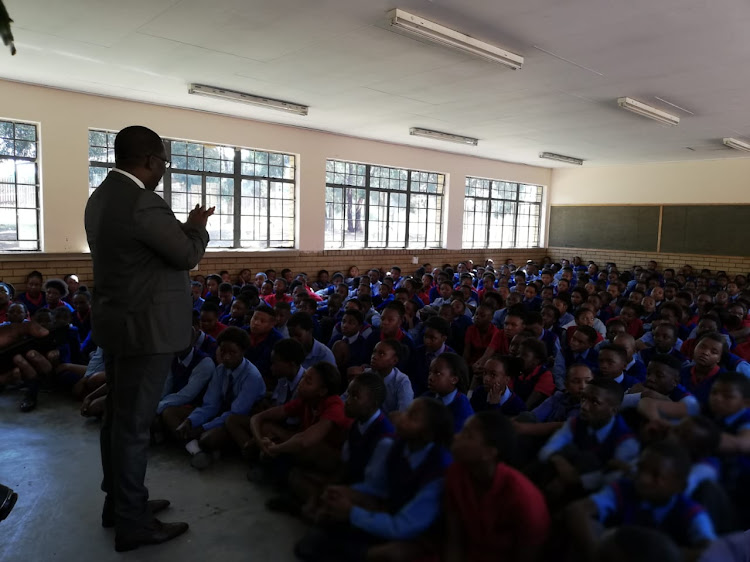 Education MEC Panyaza Lesufi addresses children at the school after a pupil was allegedly raped by classmates.
Image: Nonkululeko Njilo

The Gauteng Department of Education said it would leave no stone unturned after a Soweto grade 8 pupil was allegedly raped by three classmates during an orientation camp in Vereeniging over the weekend.

MEC Panyaza Lesufi said he was heartbroken and embarrassed after hearing the news.

"It came as a shock because I have been at this school to honour and appreciate the good work. I was embarrassed when I was also told that children of this school even tried to smoke something [hubbly bubbly]," said Lesufi during his visit to the school on Tuesday.

"Were doing everything possible to support the girl but also to support the boys. We're also trying to find exactly happened so that we don't pass judgment, not knowing what happened," he said.

Social workers were sent to the school.

Lesufi said, "I want to make something clear, you touch a girl child wrongly, you leave the school. The same applies to boys," he said while pupils clapped in agreement.

Three boys have been suspended from a Soweto school and are facing a court case following a charge of rape being opened with police.
News
3 years ago

Lesufi said the pupils involved have all been suspended after an emergency meeting was held by the school's governing body (SGB) on Monday.

He said the rape allegedly happened after the girl in question went to the boys' chalet with the intention of speaking to one of them and collecting something to smoke. Teachers who were at the camp told Lesufi that two of the three boys admitted their involvement in the assault.

The MEC said it was important for him to personally address the children because a similar incident had occurred at another school and the pupil who was raped committed suicide.

Department spokesperson Steve Mabona confirmed that a case had been opened with the police.

A full report is expected to be presented during a parents' meeting on Saturday, Lesufi said.

Provincial education authorities have established a task team to investigate the alleged rape of a girl in Grade 1 by an 11-year-old boy in Grade 5 ...
News
3 years ago