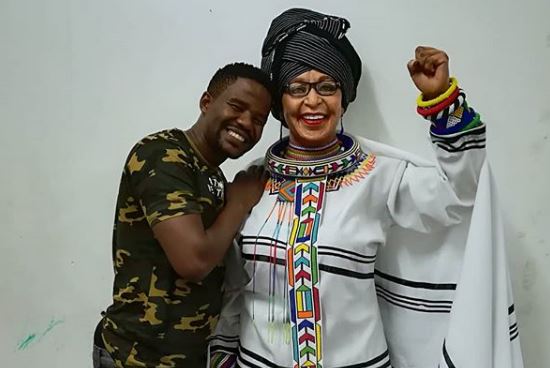 As the Economic Freedom Fighters (EFF) were on Tuesday expected to table a motion in parliament for the renaming of Cape Town International Airport to Winnie Madikizela-Mandela Airport, a Durban-based sculptor is hoping to be the one who gets commissioned to create a statue of Madikizela-Mandela for the airport.

Lungelo Gumede and six others have already created a life-sized wax statue of Madikizela-Mandela which they unveiled at their pop-up museum several days ago.

"On Twitter alone, we had 300,000 responses and 100% of them were positive. The only criticism we received was why we placed the statue of Tata [former president, Nelson Mandela] next to her. So it was all just politics but nothing on the statue itself… This has been the biggest positive reception we have had and it has just been overwhelming," Gumede said.

Our newest edition to our museum. The female President we never had 😚, Mama Winnie Mandela and our first black President, Nelson Mandela. @ZindziMandela here are your Parents 😊😊😊.

RT if you approve 😉 pic.twitter.com/71sIqa5n3i

While most of the wax statues that he and his team have created have usually taken four to six weeks, the statue of 81-year-old Madikizela-Mandela, who died in April 2018, took the team 10 weeks to complete, with one person focusing on the mould, the other on intricate details such as her eyelashes and lips and even someone commissioned to focus on the Xhosa attire that Madikizela-Mandela is wearing.

Gumede explained that South Africans were unforgiving when it came to artist's productions and it was therefore important that they got this statue 100% correct.

The biggest nod of approval that they were looking for, however, was from Madikizela-Mandela's daughter, Zindzi.

After reaching out to her via Twitter, Gumede said she had since responded.

"She contacted us, asking for our details and our profile to see how we work and the material that we do. We are working on a report which should be ready for her by Wednesday," he said.

"We just want to observe the motion in parliament today and write our proposal based on the outcomes," Gumede added.

Gumede said he and his team had already created bronze structures, one of which stood at the King Cetshwayo municipality in KwaZulu-Natal, another outside the King Dinuzulu Hospital and another at the Kokstad municipality.

Besides these statues, he already has a collection of statues at their pop-up museum which boast both local and international distinguished people such as Queen Elizabeth, Angelina Jolie and Mahatma Gandhi.

A new statue on Nelson Mandela Square in Johannesburg is aimed at making the “impossible possible” by letting visually impaired people “see” Nelson ...
News
3 years ago