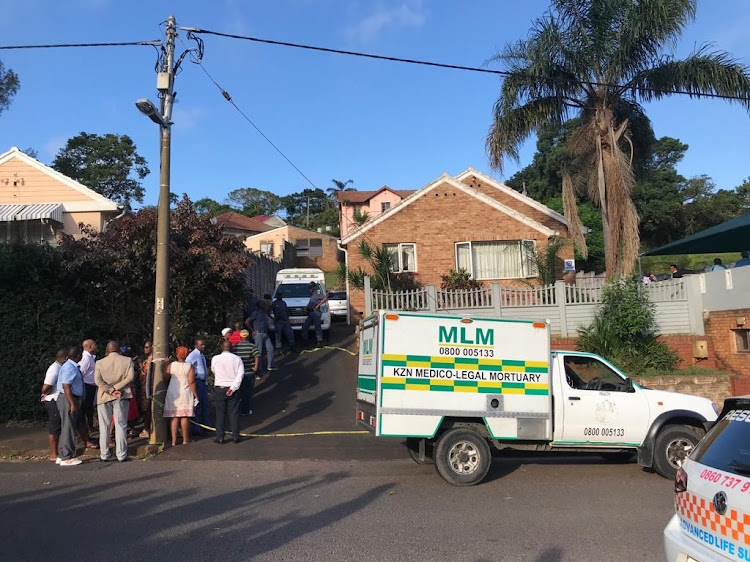 Family and friends of a Montclair family of five gather outside their house on Wednesday.
Image: Thuli Dlamini

The father of a 41-year-old man who was found shot dead - together with his wife and three children - at their Montclair home in Durban on Wednesday cut a lonely figure sitting in an armchair outside the house while police and forensic pathologists examined the scene.

Sipho Mkhize, 71, looked distraught. His wife Thandi, 70, wept as they waited to be allowed into their son's home.

Thandi told TimesLIVE that they did not know what was the cause of the incident, which claimed the lives of the father, mother and three children between the ages of nine and 17.

Police spokesman Colonel Thulani Zwane said four counts of murder and one inquest was being investigated following the shooting, which took place at about 12.45pm.

He said police had been alerted to the complaint by a neighbour, adding that a firearm had been found at the scene. "Circumstances around the incident are being investigated," he said.

Police and emergency workers are at the scene of a shooting in Montclair, south of Durban where five people are dead.
News
3 years ago

Xolani Mkhize, the brother of the man, said the family received a call at around 2pm from a woman who told them something tragic had happened.

He said the family rushed to Montclair from KwaDukuza on the KZN north coast, but by the time they arrived, the crime scene had already been cordoned off by the police and pathologists. They were instructed to wait until the pathologists and the police had finished with their work.

In response to speculation that the deaths may have been a murder-suicide, Mkhize said he was not aware if the couple had any domestic problems. "He never told us anything. We are very shocked by what has happened," he said.

One neighbour told TimesLIVE that he saw the man taking the children to school in the morning. Other neighbours said they were shocked at what happened as they believed the family were happy.

"We were only informed by the police, who were inquiring about had happened and if we heard any gunshots, but we told them we heard nothing. We don't know if they had any problems because we always saw them doing things together," said a neighbour.

The bodies of a family of five, killed in a multiple shooting incident at their home leave in a mortuary van @TimesLIVE
🎥: @moskido #MontclairShooting pic.twitter.com/vIzXHzGLMG

A 33-year-old taxi driver, who fled the scene of a deadly crash on Wednesday, was arrested at the KwaMashu police station.
News
3 years ago

One of the five people wounded in a mass shooting at the Durban flat of an off-duty cop has died.
News
3 years ago

Two men were riddled with bullets after gunmen opened fire on their car on Tuesday.
News
3 years ago

Rescue Care paramedics are treating a 61-year-old man who was shot during a shooting in peak-hour morning traffic in Pinetown on Friday morning.
News
3 years ago