Traffic police get warnings after probe into 'speeding bribe' video 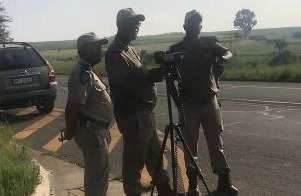 The traffic officers who were suspended after allegedly soliciting a bribe from a motorist.
Image: Facebook/ Screenshot via Lindelani Shezi

Four traffic officers who were filmed while allegedly soliciting a bribe from a motorist are back at work.

Mpumalanga community safety MEC Pat Ngomane said on Wednesday that he had reinstated the officers after initially placing them on precautionary suspension in January.

"The four officers resumed work on February 20 2019 after the completion of an internal investigation by the department into the matter," Ngomane's office said in a statement.

The incident was recorded by motorist Lindelani Shezi and shared on social media.

This morning as I was driving from Ermelo to Nelspruit, I was stopped by traffic police and asked for a license, checked...

He claimed to have been driving between Ermelo and Nelspruit when he was stopped by the officers, accused of speeding and told to collect a R1,500 fine.

"Then I was asked if I will really take the R1,500 fine or do I have money on me. I refused to pay the bribe. I asked him to show me the speed recording on the camera which he could not, then I felt I was being taken for a ride in Mpumalanga with my KZN-registered vehicle," Shezi said at the time.

"I opted to record this whole thing. I was threatened, assaulted and the traffic officer refused to give back my licence nor to write me the fine. I informed them I will lay charges at the nearest Badplaas police station, they even told me where the police station is. They had their identity name tags hidden," he said.

Shezi claimed to have gone to the police station to open a case.

Shezi's video of the incident went viral with more than a million views.

Ngomane said the officers were found to have contravened the public service code of conduct.

Three of them were issued with warnings while the fourth is yet to undergo a formal disciplinary hearing.

Two men contracted to the City of Johannesburg have been given a two-year jail term - or made to pay a R20,000 fine each - after pleading guilty to ...
News
3 years ago

About half of South Africans on average have seen or experienced taxis breaking the law.
News
3 years ago