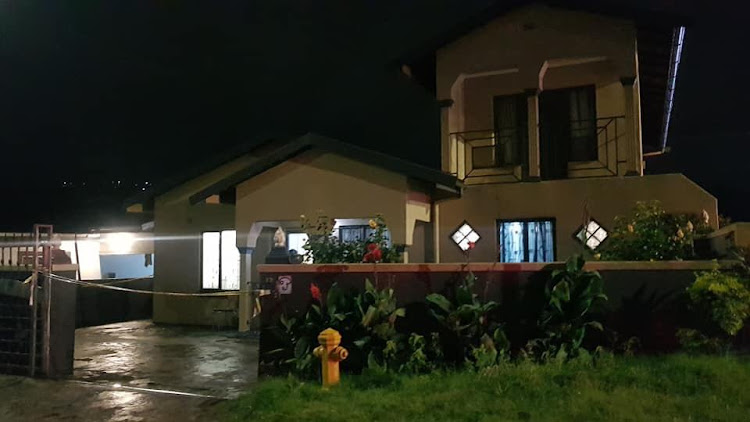 Security services and police respond to the scene of a double shooting in Palmview Phoenix on Sunday night where a husband and wife died.
Image: Reaction Unit of South Africa

A tragic double shooting took place at a Phoenix, KZN, home on Sunday night where a couple died following an alleged domestic dispute.

Reaction Unit of SA head Prem Balram said security services and police responded to complaints of shots being fired at a property at Fanpalm Gardens at about 9.15pm on Sunday.

Balram said it was alleged the couple were involved in a domestic dispute before the shooting, which occurred in the presence of their two children. It is believed the man shot his wife before turning the gun on himself.

Balram said the children had witnessed the shooting but were not injured. They were later taken away from the scene by relatives.

Police KZN spokesperson Lt-Col Thulani Zwane said a case of murder and an inquest were opened at the Phoenix police station "after two bodies of a man and his wife were found in the house with bullet wounds on their heads on Sunday night".

"A 9mm pistol was found next to the bodies. Circumstances surrounding their killing are under investigation."

The deaths comes in the wake of a horrific incident last Wednesday where a Durban court interpreter is believed to have killed his wife and three children before turning the gun on himself.

Horror and disbelief as Montclair shooting sends shockwaves across SA

The death of five family members from Montclair in Durban has sent shockwaves across the country.
News
2 years ago

Police and emergency workers are at the scene of a shooting in Montclair, south of Durban where five people are dead.
News
2 years ago