New giant pumpkin record-holder: 'I've never eaten one of my own'

No GMO - SA winner shares his tips on becoming a champion 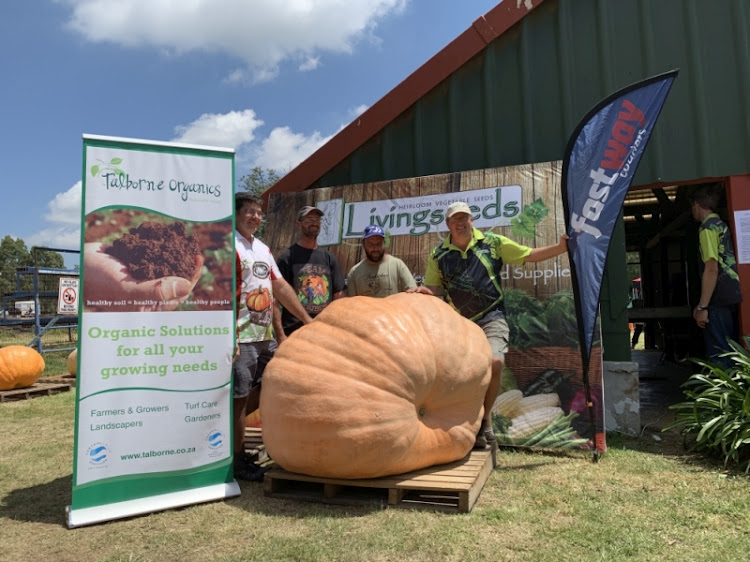 Peet Joubert has broken the record for growing the largest pumpkin in SA, but has never reaped what he sowed.

“I eat anything. I’m not afraid, but, to be honest, I’ve never eaten one of these pumpkins which I grew. I have no idea what they taste like. I just hear they are bland. I’m just after the size,” Joubert, 33, told TimesLIVE on Sunday after smashing the record on Saturday at the Livingseeds Giant Pumpkin Competition held at the Walkerville Agricultural Show in Walkerville, Gauteng, raking in R30,000 in prize money.

‘Bekkie’ (Little Mouth/Beak) the pumpkin weighed in at 613kg, breaking the record held by Hugo le Roux for ‘Maximus’ which weighed in at 556kg at the Goliat van Gat Pampoenfees (Pumpkin Festival) in Pretoria in 2017.

“The people laughed in the beginning, because it’s a new thing in South Africa, so people think you’re weird, until they see how big it is and then everyone knows you.”

People keep telling Joubert he can make food for the whole world now.

“If people really wanted to, I’m sure they could make pumpkin fritters, but that joke is becoming old now.”

Joubert started by preparing a patch in his front garden during the winter last year by removing the grass and working horse and cow dung into the soil. In October he planted the pumpkin seed in an indoor greenhouse to let it grow for two or three weeks under growth lights, before planting it outside.

“It grows extremely fast, so every day you have to cover its shoots with extra ground for it to take root. Bigger roots, bigger fruits. The secret lies with the roots.”

Joubert said the roots should grow like a Christmas tree with mostly primary and secondary roots. Any extra roots are cut off.

“You have to make sure there are enough roots for photosynthesis to give energy to the fruit, but if you have too many roots, then the plant takes energy away from the growth of the fruit.”

‘Bekkie’ was his first attempt after researching for about a year how to organically grow these behemoths without growth hormones.

Joubert does not have a gardener and spent at least two hours a day tending to his pumpkin, running up to more than five hours during the heatwave in December.

On his own Facebook page, Joubert has been sharing his experience of growing the pumpkin from seed to the monster size the plant became.

Sean Freeman of livingseeds.co.za said these pumpkins grow at such a rapid rate that one can see them gaining between 25kg and 30kg in a single day.

Even transporting a giant pumpkin from a grower's garden is a mission that cannot be underestimated, said Freeman.

Joubert's trailer that was used to carry the pumpkin became bogged down in the soft soil with the weight of the pumpkin. As a result, said Freeman, he had to lift a three-ton trailer “that also had the added weight of the record-breaking pumpkin on it, and it had to be done in a way that did not put the ‘life’ of his pumpkin in jeopardy.

"Any structural damage to the pumpkin caused by a wrong move, or the trailer slipping off a jack, would have disqualified his entry, even before it had arrived at the weigh-in.”

Wykus Lamprecht was the runner-up with his 357,5kg pumpkin ‘Tikvah’, which means hope in Hebrew. His 3m trailer was too short for ‘Tikvah’ and the other two pumpkins he wanted to load, so it had to go on the back of his bakkie.

“At the start of the season my only hope was to grow a pumpkin which would be at least about 300kg.”

It's the most stressful thing I've ever done, says giant pumpkin grower

At least two hours a day tending to his pumpkin, with the heatwave during December requiring in excess of five hours' attention a day being poured ...
News
2 years ago