Image: Gallo Images/Brenton Geach Rob Packham in the Cape Town high court in December 2018, when his bail was withdrawn. He goes on trial on Monday for the murder of his wife, Gill..

Businessman Rob Packham, who is accused of killing his wife and setting her remains alight in her car, goes on trial on Monday in the Cape Town high court.

The 57-year-old father's fight to clear his name has been beset by legal obstacles of his own making since his arrest a year ago.

In December, he moved from his Constantia home to a prison cell after the high court revoked his bail when he violated its conditions.

Packham's lawyer, Ben Mathewson, said his next option was to petition the supreme court of appeal for the reinstatement of bail. But Mathewson would not say whether Packham would do so while the trial continues.

“I don’t speak to the media,” he said. “You know my policy … I would rather not comment on the matter. I don’t want to be rude or anything but I won’t be discussing anything. I hope you understand.”

Judge Elizabeth Baartman found that Packham breached his R75,000 bail by contacting witnesses, which he denied.

During an inquiry into the allegations, the former beverage company manager said his release was crucial because he needed to walk his daughter down the aisle. He said he had also received hate mail.

It turned out that Packham’s bail had been paid by someone else, and Baartman returned the money to the “depositor”.

According to the prosecution, Packham breached his stringent bail conditions by sending SMSs to a friend he shared with his former mistress. The former mistress, who cannot be named as per court order, is a state witness.

The prosecution argued that by contacting the friend, Packham indirectly tried to reach his former mistress. 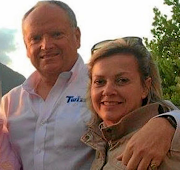 Image: Supplied Rob Packham with his wife Gill, whom he is accused of murdering.

Baartman dismissed Packham’s application for leave to appeal against her decision last month. “I am persuaded that there is no sound or rational basis to conclude that there are prospects of success on appeal,” she said.

In September, Judge Nathan Erasmus released Packham under strict conditions after the accused man was caught on camera delivering flowers at his former mistress’s workplace.

The woman also received e-mails from a person purporting to be Richard J Hopkins, who urged her to mend relations with Packham after he was charged with murder, and detailed intimate specifics of their extramarital affair.

The woman complained to the police that he was harassing her, and Hopkins was unmasked as Packham.

One of the conditions Erasmus imposed was that he should not have access to any devices capable of sending and receiving electronic communications.

The court ordered him to pay an extra R25,000 on top of the R50,000 bail he had already paid, permitted him to go shopping once a week for three hours and to attend a weekly church service, and stated he must report to the police daily.

Packham was ordered to contact the investigating officer via his landline before leaving home and when he returned.

Packham is accused of killing his wife, Gill, putting her body in the boot of her car and setting the car alight at Diep River railway station in February 2018.

According to the state, Packham was bust by licence-plate recognition cameras that showed him driving Gill’s BMW, while cellphone tower records showed he drove around Constantia on the day of her disappearance.

Gill’s charred body was found in the boot of the car after firefighters extinguished the flames. A post-mortem examination showed blunt-force trauma to the head had killed her.

Earlier, alarm had been raised when did not arrive for work at the Springfield Convent, a high school in Wynberg, where she was a secretary.