'Why did they take my one and only child?' cries mom of Mondeor victim 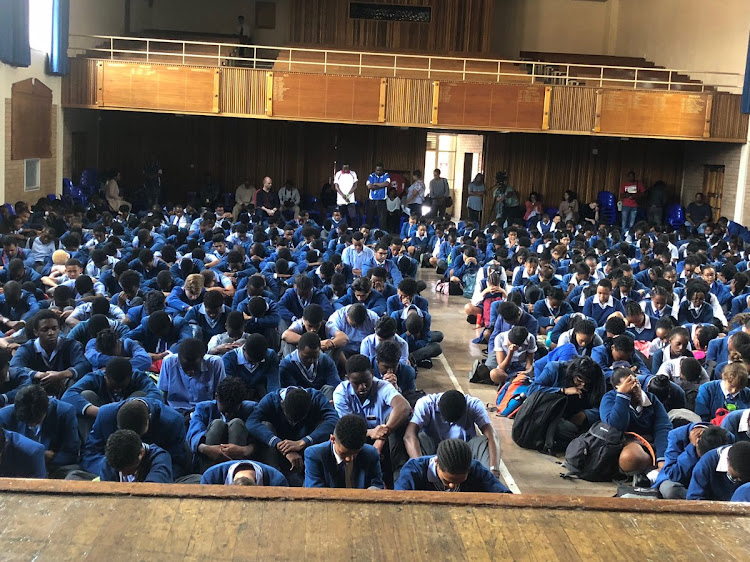 Pupils of Mondeor High School receive the news that one of their schoolmates was stabbed to death on Wednesday.
Image: MEC Panyaza Lesufi via Twitter

The cries of Kulani Mathebula's mother pierced the silence of the quiet suburb of Mondeor in the south of Johannesburg on Wednesday afternoon.

"My one and only child! Why did they have to take him away from me?" Dumi Chauke cried as she was led into a vehicle parked just metres away from where her son's body lay.

"Kulani! Kulani," the 36-year-old woman wailed as she walked away from the mortuary van. She and a female relative were distraught as they came to see Kulani's body being removed from the spot where he took his last breath.

Kulani was stabbed - reportedly three times in the chest - just minutes after he left home to go to school.

His uncle, Themba Chauke, told the media that he was shocked when he received a distraught phone call telling him to rush to the scene where Kulani had been stabbed.

The body of a 16-year-old boy who was fatally stabbed on his way to Mondeor High School in the south of Johannesburg lay sprawled on the green grass ...
News
2 years ago

"I just received a call this morning from my younger brother. He was just crying uncontrollably saying, 'Brother, they've stabbed Kulani - come quickly.'"

Chauke said when he arrived at the scene, he asked the police where his nephew was - but they didn't immediately give him answers.

"Then I saw him - lying there, helpless," said Chauke, breaking down.

Asked what kind of person Kulani was, his uncle simply replied: "He had a bright future ahead of him. To think it would end like this ... I expected a lot from him."

While paramedics earlier said that the stab victim was a 16-year-old boy, his family clarified that Kulani was actually 19.

Kulani is believed to have been the grandchild of renowned Xitsonga musician Thomas Chauke.

One of the last people to have seen him alive was school principal Vangelia Nicolaou, who went to the scene after hearing of the stabbing. "I am distraught because it's terrible for a mother to lose a child," she told reporters.

A 16-year-old boy was killed outside the Mondeor High School in the south of Johannesburg on Wednesday, paramedics said.
News
2 years ago

Kulani was later certified dead by paramedics, who said all efforts to revive him had failed.

Earlier, when TimesLIVE arrived at the scene, the sole of his now-pale foot was protruding from the silver foil that covered his body. His blue school bag was lying close to his body.

Forensic pathologists were combing the scene. At one point, they opened the foil to take pictures of his body - leaving community members and concerned parents shaken.

It is unclear what the motive of the attack was.

"We have zeroed in on three learners from other schools in the area - but whether it's them, we are not sure," said Lesufi.

Police could not immediately confirm whether anything was taken from Kulani during the attack.

It’s with a heavy heart that I hear of the stabbing of a grade 11 #MondeorHighSchool learner on his way to school. How do we protect our people with such thugs out there ! RIP Kulani ✝️🙏🏽 God Bless the teachers & learners of #MondeorHigh #TheBlueWave #MondeorStabbing @Lesufi pic.twitter.com/QsBN4bYqAF

We were always warned about walking alone by this river. Students used to get mugged all the time here, it was a hotspot. From cellphones to even our karrimor backpacks were the target. https://t.co/3MG3I9M29x