WATCH | From king of the jungle to common criminal: Lion spends night behind bars 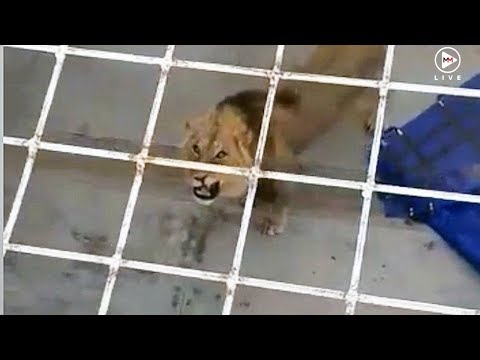 The lion which escaped about a month ago from the Karoo National Park spent Wednesday night behind bars.

SANParks said on Wednesday that the lion had been darted and was in a police holding cell in Sutherland, awaiting a crate to transport him back to the park.

The missing lion was darted and is currently being kept in a police holding cell in Sutherland. Awaiting a crate to transport him back to the Park in. @SANParks

The lion escaped from the park on February 15.

Dead livestock, believed to have fallen prey to the animal, were discovered on a farm in the Northern Cape on Sunday.

The lion was found near Sutherland, about 200km from the park.

It is not the first time a lion has escaped from the park. Sylvester escaped in 2015 and again in 2016.

He evaded capture for three weeks during his first escape in June 2015 and wandered more than 370km.

Social media was quick to make quips about the lion in custody.

Christo Kemp wrote on Facebook: “Glad they could have find Johnny Walker.”

Tracy Wood Blignault wrote: “The reaction of the guy in the cell next door… Priceless.”

South African Police have arrested a lion, it's spending the night in jail. I assume it will appear before the magistrate in the morning for a hearing. Urban South Africa 🙄

I wonder how those police officers are even gonna work knowing that a lion is inside a holding cell 😳😳😳. South Africa 😳😳😳