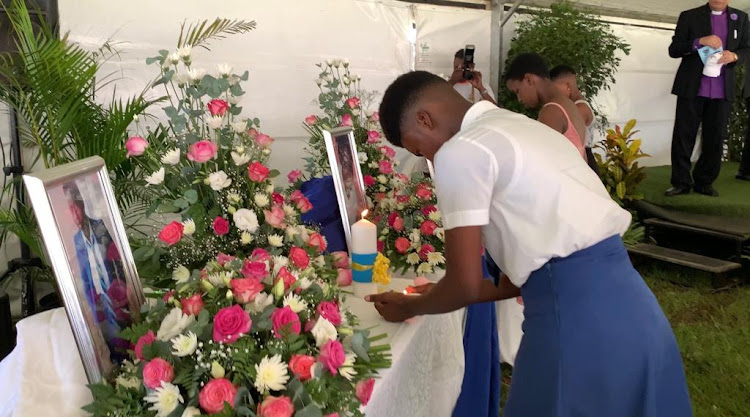 Newlands East Secondary school held a memorial for three pupils on Wednesday, March 13, 2019. The girls died after a taxi crashed into them as they were walking to school
Image: Jackie Clausen

"We have lost a lot. She could have been the next mayor."

These were the sombre words of Nokuthula Ngiba whose niece, Thina Ngiba, was one of the three girls who were tragically killed in a taxi accident in  Newlands East, north of Durban, on March 6.

Thina and her friends, Ayanda Mtshali and Luyanda Ngubane, were walking to school when a taxi ploughed into them while they were standing on a pavement at the intersection of Dumisani Makhaye Drive and Inanda Road. A fourth girl, Bongeka Ngubane, is being treated in hospital.

Ngiba was speaking to TimesLIVE at Newlands East Secondary school where a memorial service was held for the three girls on Wednesday. Hundreds of school children filled a tent at the school to bid farewell to their schoolmates. Pink and white roses were arranged around pictures of the smiling girls.

The girls were all described as jovial and fun-loving souls.

"Ayanda always wanted to see people happy. She was a calm and understanding person. If she saw you in a hard situation she would try by all means to comfort you," said Kwanda Phungula, who had been friends with Mtshali since they were in primary school.

"These three beautiful souls, no one deserves it. They were taken too young, they were so young," said their teacher, Thembokuhle Ndimande.

Meanwhile, Siboniso Zwane the man accused of driving the taxi that killed the girls, was released on R3,000 bail - something Ngiba was not pleased to hear.

"I was not in court and I am shocked to hear that he was released, we did not want him to be released," she said.

The girls will be laid to rest at the weekend.

Bail for taxi driver who ploughed into teens, killing three

Siboniso Zwane, the driver of the taxi that killed three Newlands East school girls, has been granted R3,000 bail.
News
3 years ago

A schoolgirl who was hit by a taxi that killed three of her friends in Durban on Wednesday is in a stable condition in hospital.
News
3 years ago

The driver of a taxi that killed three schoolgirls in Newlands East, Durban on Wednesday fears that the community is baying for his blood.
News
3 years ago