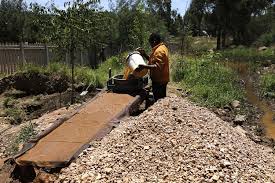 Lured underground with the promise of jobs, 24 unemployed young men from Randfontein and Westonaria on Gauteng’s West Rand instead found themselves held hostage by suspected illegal miners.

Now police in have arrested three suspects who allegedly held the men captive in one of the Westonaria mineshafts.