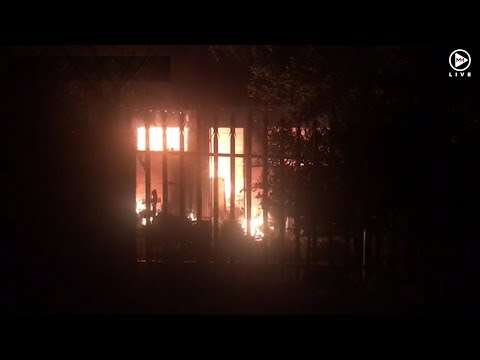 An elderly woman is fighting for her life in hospital after she was injured in a fire, believed to have started by an overturned candle she had lit during load-shedding on Saturday night, according to her family.

Patricia Dollery, 85, of Kyalami, north of Johannesburg, has been in ICU since the fire, which occurred at her home on the plot she shares with her daughter, Carol.

Dollery was alone when her electricity went out. She lit a candle to move around the house.

“We’re assuming the candle fell over or she forgot to blow it out. The house then started burning down. My sister (Carol) got home about 20 minutes later and struggled to open the front door because my mother was behind it,” her elder daughter, Fiona, told TimesLIVE.

Image: PROVIDED Patricia Dollery 85, is in hospital after sustaining severe burns in a home fire.

Moments later, the younger daughter managed to open the door and rescue their mother, who had already sustained burn wounds and smoke inhalation.

“She was so badly injured that she had to be airlifted by a helicopter and be taken to hospital, to the burns unit," said Fiona, adding that her mother's condition had not improved much.

“When I spoke to the hospital this morning, they said she was stable, but her lungs were severely damaged," she said on Wednesday.

"I keep on going to visit, even though she doesn’t know or see that I’m there,” she said, with a trembling voice.

Meanwhile, her sister is struggling with her breathing as a result of smoke inhalation

Asked how the family was holding up, Fiona responded, “We’re taking it one day at a time, but my sister is more traumatised because she was there, she’s the one who rescued her [mother].

The family is appealing for donations, including practical items like bedding, to help the mother and daughter to rebuild their lives.

"They lost everything: possessions and animals. (It) could really make a difference because we are starting from scratch,” Fiona said.