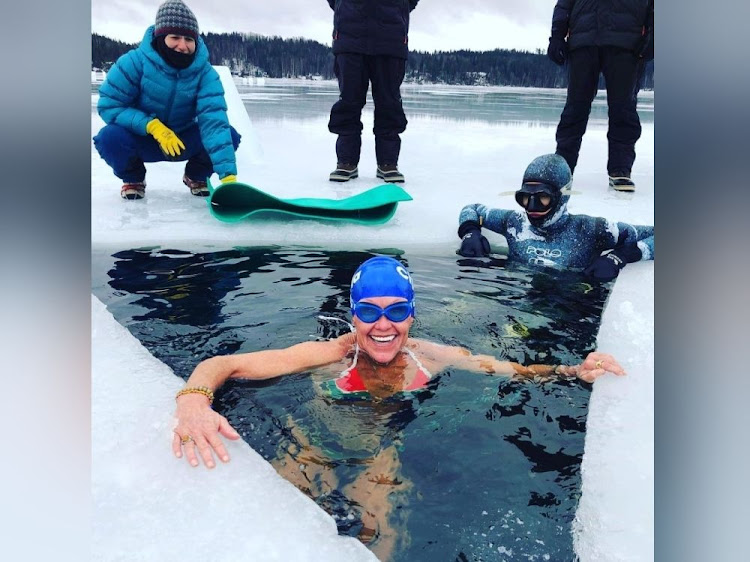 South African free diver Amber Fillary, 46, will try to break a world record on Thursday in an icy lake in Finland after struggling with an eating disorder, alcoholism and bouts of suicidal depression.

"I am under no illusion that this is not going to be easy. In South Africa I managed to swim underwater for up to 135m without taking a breath, but in near-freezing temperatures your muscles are slower, so swimming is much more challenging as you use more oxygen"” Fillary, whose record for holding her breath under water is six minutes, said on Wednesday.

Johanna Nordblat is the current record holder who dove 50m under the ice in 2°C temperature water in March 2015 wearing only a swimsuit, mask and cap.

Nordblat challenged Fillary two years ago while Fillary was getting her world record attempt into place, but Fillary declined as she was struggling from depression.

Drilling the holes in the lake I will do my record attempt at Preparing for my attempt at the...

"I eventually went to see a psychiatrist who prescribed medication that helped me to better cope with the illness. Once I was back on my feet, I decided to accept Johanna’s challenge"

Fillary finds diving to be a meditative experience which calms her mind.

"Free diving requires you to be in a calm state of mind, because the moment you become tense, you lose your ability to stay underwater for long periods," Fillary said.

"Depression robs you of your confidence and makes every task you attempt seem overwhelming … I have learned that the human body is able to achieve so much more than imagined if we can overcome our fears and mental barriers."

Fillary wrote on her GoFundMe crowdfunding page: "Although I am hoping to break the record, this attempt is more about showing other people, who suffer from similar life challenges, that we are all able to do what is perceived to be impossible."

Isaac Chilemba's biggest fights is against the pain within himself

Isaac Chilemba's biggest fight hasn't been inside the ropes, but rather his lifelong battle against depression and, more recently, substance abuse.
Sport
2 years ago

An online 'guru' is okaying suicide, telling people that it is a 'reset button'
Lifestyle
2 years ago

Craig Lucas on depression: I just ate & drank myself to death every day

Craig Lucas has shared parts of the hard journey to healing in his struggle with depression, opening up to fans about the uphill battle he faces and ...
TshisaLIVE
2 years ago