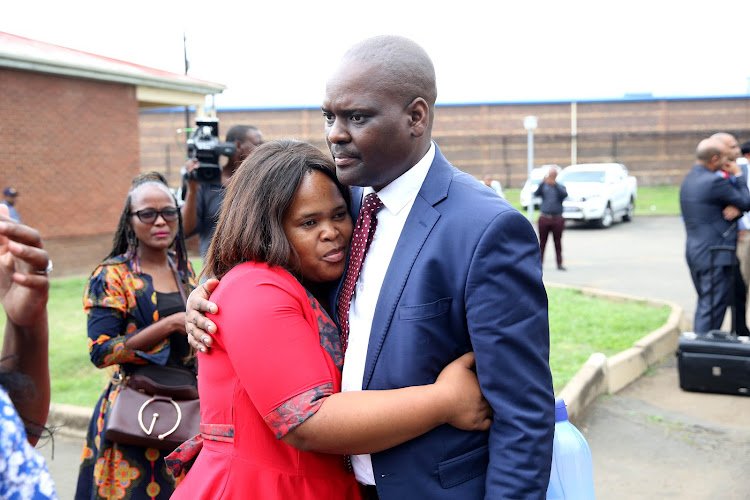 Harry Gwala district mayor Mluleki Ndobe with his wife Nobuhle outside the Umzimkhulu Magistrate's Court on March 25 2019. The state withdrew a charge of murder and two counts of attempted murder against him.
Image: Thuli Dlamini

The state withdrew a charge of murder against Harry Gwala district municipality mayor Mluleki Ndobe in the Umzimkhulu Magistrate's Court on Monday.

Ndobe, Sbonelo Myeza, 39, Mbulelo Mpofana, 34, and Zweliphansi Skhosana, 48, were  charged with the 2017 murder of ANC Youth League general secretary Sindiso Magaqa, after the state previously alleged that they had acted in "common purpose" in having premeditated the murder of Magaqa.

They also face two counts of attempted murder. According to the charge sheet, the second and third counts relate to the attempted murder of Jabulile Msiya and Nontsikelelo Mafa on July 13 2017, the same day Magaqa was gunned down.

The four were expected to make a formal bail application on Monday and Tuesday.

However, after lunch, control prosecutor Sohana Moodley informed the court that the state was withdrawing one count of murder and two counts of attempted murder against Ndobe and Skhosana.

The case was remanded until Tuesday for a formal bail application for the remaining three men.

Following the decision, Ndobe briefly addressed the media before swiftly being swept away.