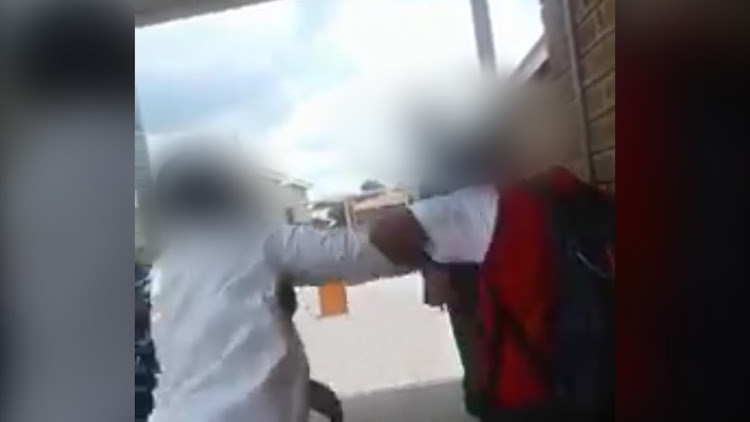 Two boys expelled for assaulting a pupil at the Duvha Combined School in Witbank have been questioned by the police in connection with another incident.
Image: Supplied

The two grade 9 pupils who were expelled from the Duvha Combined School in Witbank early this month were among the suspects later taken in for questioning after part of the school went up in flames, Mpumalanga police said on Monday.

Col Mtsholi Bhembe said three people were taken in by the police and later released but investigations into their possible involvement were continuing.

"Forensic invesigations are still under way but the expelled students were among the suspects," said Bhembe.

Part of the school and a nearby substation went up in smoke on March 12.

Education department spokesperson Jasper Zwane said the administration block of the school had been torched.

"The storeroom caught fire, which affected the office of the principal and a number of other offices," he said at the time.

The Mpumalanga education department has expelled two grade 9 pupils after a video in which they bullied a grade 8 pupil at the Duvha Combined School ...
News
3 years ago

Bhembe also said that an empty container that had possibly been used to carry the substance used to start the fire had been found at the scene.

The fire occurred shortly after the department announced the school's governing body's decision to expel the two boys, who were caught on camera beating a grade 8 pupil on January 30.

The expelled boys were placed at another school.

A third pupil who was also part of the assault was given two weeks' suspension and told not to conduct himself in a similar manner in the future.

In the 24-second video, a bigger boy confronts the victim and keeps asking him (in isiZulu) what he is saying, while smacking him on the head. The younger boy, with his backpack still strapped to his back, does not reply. Instead he covers his head to protect himself from the series of blows. Another boy then joins in the pummeling. He smacks and punches the victim before a third attacker joins in, also slapping the victim.

A family member of the victim told TimesLIVE last month the bigger pupil was a prefect who had admonished some pupils for stoning the security guards' houses near the school. According to the victim, the prefect turned on him when he also chimed in to reprimand the group, accusing him of trying to "take his job".

Two of the boys who were arrested in connection with the murder of Mondeor High School pupil Kulani Mathebula have accepted responsibility for their ...
News
3 years ago

Shortly after the fatal stabbing of grade 11 pupil Kulani Mathebula in Johannesburg on Wednesday, Gauteng education MEC Panyaza Lesufi said it was ...
Opinion & Analysis
3 years ago