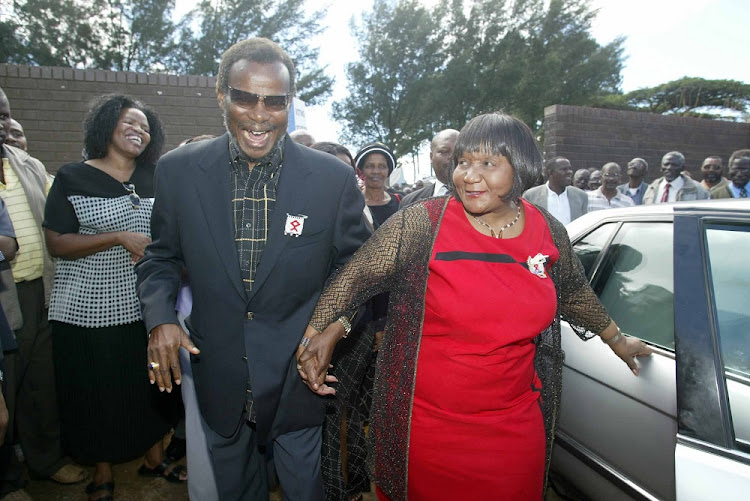 "Following a long and difficult illness, Princess Irene passed away peacefully this morning at KwaPhindangene," the family of the Inkatha Freedom Party leader said in a statement on Monday.

"She leaves behind her husband of almost 67 years, their children Prince Ntuthukoyezwe Zuzifa, Princess Phumzile Nokuphiwa and Princess Sibuyiselwe Angela, and many grandchildren. All are devastated by this loss."

The family asked for privacy as the arrangements are made for the funeral, the date of  which will be announced in due course.

"We thank our many friends and supporters for their love, prayers and condolences in this painful time.

"Our greatest solace is in knowing that Princess Irene Buthelezi has been received by her Lord. By His grace, she rests in peace," the family said.

Buthelezi, 90, previously revealed that five of their children had died, and that his wife had generously helped to raise some of the affected grandchildren.

Among the tributes pouring in at the news of the death of the 89-year-old Irene Buthelezi is one from former statesman Nelson Mandela's assistant Zelda la Grange. She commented, "Please convey my sincere and heartfelt condolences. Madiba was so fond of her."

In 2012, Buthelezi shared there was a personal friendship between them that began in the 1950s, when he discovered that Mandela was close to his father-in-law, Zachariah Mzila. He wrote: "Whenever Mandela visited him at the Eloff Street compound where he worked, Mr Mzila's daughter, Irene Thandekile Mzila, would serve him tea and become the target of his gentle teasing."

Despite Madiba's legendary charm, the then nursing student was quickly snapped up by Buthelezi.

In a February 2016 interview, he spoke to the Sunday Tribune of the day they met.

“I was mesmerised. She was full of life, intelligent and kind. She had a quiet sophistication that would have served her well in the diplomatic corps. It did not take me long to ask for her hand in marriage.”

Polygamy did not interest him: “I never lacked anything having only one wife. Princess Irene has been my closest friend, my adviser, my prayer warrior and the love of my life.”

In 2010, Buthelezi penned a tribute to his wife, who he called his closest friend.

"Irene has walked with me through countless valleys, giving to my life a flavour of joy and richness even in the darkest hours. Her strength and resilience are remarkable. ...The memories that stand out the most are not of hardship; but of laughter. Irene has a delightful sense of humour, and her smile lifts my heart."

He recounted how she could even tease him.

"I recall how, in the nineties, I was made an honorary member of the Chefs’ Association of South Africa. When I proudly related this to my wife, and showed her the certificate presented to me, she lowered her eyes and smiled. I asked her why she was laughing at me, as she so clearly was, and she explained that she had been married to me for over 40 years and had never seen me cook a single meal! I reminded her that I can fry an egg, and she burst out laughing."

UDM leader Bantu Holomisa tweeted his condolences to Buthelezi and his family, stating: "This has been a long journey for her, including to look after (son) Zuzi Ntuthuko and his siblings during difficult period in SA’s history . May her soul RIP."

DA MP John Steenhuisen posted: "Condolences to the leader of the IFP in Parliament, Prince Mangosuthu Buthelezi, and his family on the loss of Princess Irene. You are in our thoughts and prayers at this time."

Mandla Mandela said in a statement: "Our heartfelt prayers and thoughts are with you and your family in this time of your bereavement. We pray that the almighty comforts you and grants you the strength and forbearance to deal with this immense loss. May her soul rest in peace and May God Almighty place contentment,tranquility and peace in your heart and your home."

Ramaphosa said: “On behalf of the government and people of South Africa, I offer Prince Mangosuthu Buthelezi my deep sympathy at the loss of a partner, soul mate, confidante and advisor of many decades’ standing. The loss of one so close and special at this late stage in life is a great sadness.

“It is my wish that Prince Mangosuthu Buthelezi and his family will reflect with fondness and pride on the many years during which Princess Irene Buthelezi served as a tower of strength to her family and community”.

Buthelezi's IFP 'strong as an elephant' as it launches election campaign

Hundreds of IFP supporters who gathered in front of the Durban City Hall on Tuesday for the launch of party’s voter registration campaign went wild ...
Politics
3 years ago