By SUTHENTIRA GOVENDER and LWANDILE BHENGU 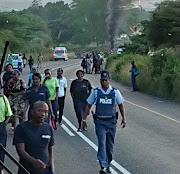 A 22-year-old man was shot dead and two others injured after more than 100 people stormed tuckshops in Kenville outside Durban on Sunday.

"The shop owners opened fire, fatally wounding a 22-year-old man in the neck and wounding two others, who were rushed to hospital for medical attention.

"Tuckshops were looted and burnt by protesters. Passing vehicles were also stoned and damaged."

Zwane said two counts of attempted murder, one count of murder and public violence were opened at the Greenwood Park police station.

"Two suspects were arrested for public violence and will appear in court soon."

On Monday, protesters stoned cars, burnt tyres and threatened motorists with sticks in Mandeni on the north coast.

A traffic official, who did want to be named, said the situation was "serious" and police were battling to contain protesters.

"It appears the protest is related to lack of service delivery. The protesters are quite violent and have been intimidating motorists."

He said the protest had affected traffic on the N2 freeway, both north and south bound.

Meanwhile, on the south coast between Port Shepstone and Kokstad, more than a thousand protesters also burnt tyres and blocked off roads.

Zwane said the protest was also believed to be related to lack of service delivery.