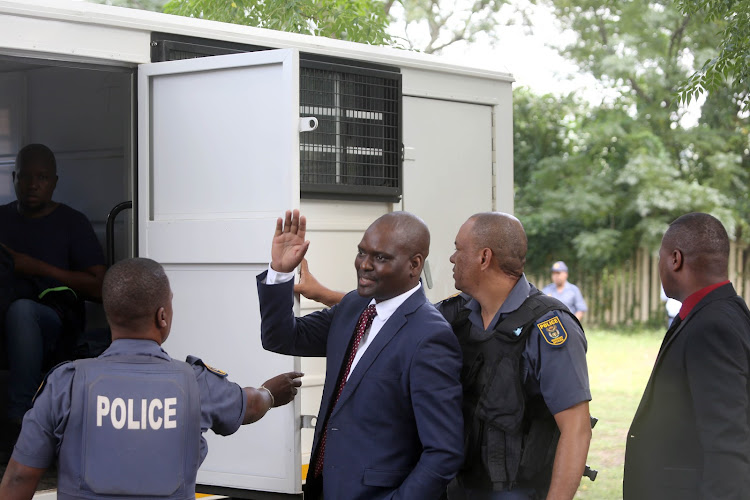 Harry Gwala district mayor Mluleki Ndobe waves before entering a police van to consult his lawyer ahead of his appearance in the Umzimkhulu Magistrate's Court on Monday.
Image: Thuli Dlamini

Police presence was tight at the Umzimkhulu Magistrate's Court on Monday, where protesters have gathered calling for Harry Gwala district mayor Mluleki Ndobe, 41, and his three co-accused to be denied bail.

Ndobe, Sbonelo Myeza, 39, Mbulelo Mpofana, 34, and Zweliphansi Skhosana, 48, have been charged with the 2017 murder of former ANCYL general secretary Sindiso Magaqa. The state has previously alleged that they had acted in "common purpose" in having premeditated the murder of Magaqa. They also face two counts of attempted murder.

ANC supporters gather outside the Umzimkhulu Magistrates Court in protest at the trial of the accused allegedly involved in the killing of ANCYL #SindisoMagaqa ⁦@TimesLIVE⁩ pic.twitter.com/ni5j7GpKhg

According to the charge sheet, the second and third counts relate to the attempted murder of Jabulile Msiya and Nontsikelelo Mafa on July 13 2017, the same day Magaqa was gunned down.

Ndobe's attorney earlier consulted with him in a police van used for the transportation and detention of criminals. 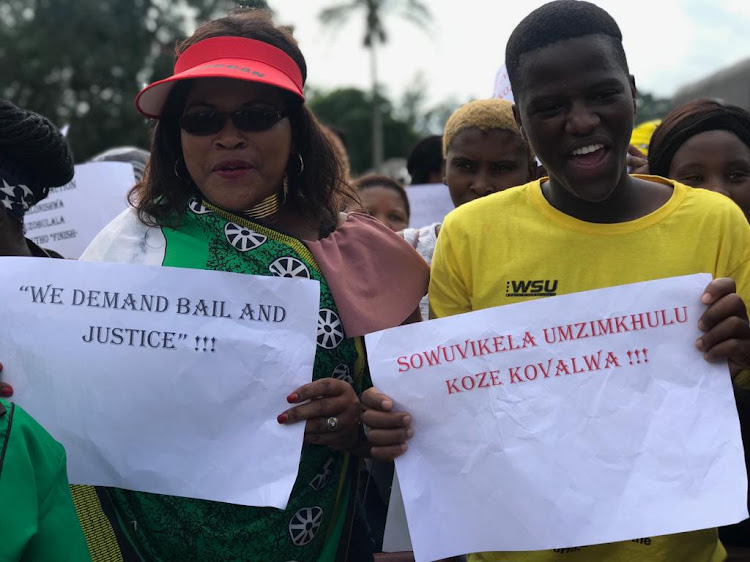 Protesters outside the Umzimkhulu Magistrate's court on Monday are opposed to mayor Mluleki Ndobe being granted bail.
Image: Thuli Dlamini

Meanwhile journalists were left scrambling as court officials informed them that due to a lack of capacity in the court, only a certain number would be allowed into the courtroom to cover the case.

More than 20 print and visual journalists from various media houses have descended upon the small town of Umzimkhulu, 160km southwest of Durban.

According to court officials, only six members of the media would be allowed into court once proceedings got under way.

The bail application hearing has been set down for Monday and Tuesday.

Ndobe's arrest was followed by the detention of Newcastle mayor Nthuthuko Mhlaba on Friday. It has been reported that Mhlaba's detention is linked to the 2017 death of ANCYL official Wandile Ngobeni.

The police didn't respond to queries about whether Mhlaba had been arrested or was due to appear in court.

KwaZulu-Natal police have taken Newcastle mayor Ntuthuko Mhlaba into custody on Friday, reportedly in connection with a political killing in the ...
Politics
3 years ago

A heavy police contingent has been stationed at the Umzimkhulu magistrate's court on Tuesday ahead of the appearance of Harry Gwala municipality ...
News
3 years ago