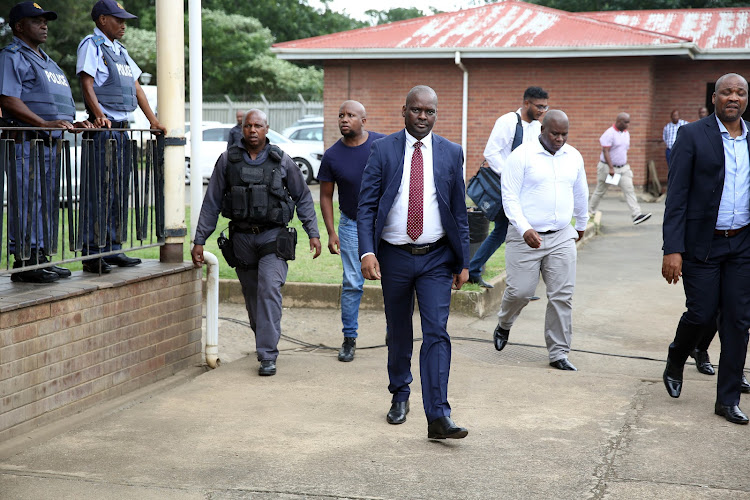 Harry Gwala district mayor Mluleki Ndobe outside the Umzimhulu Magistrate's Court on March 25 2019, after a murder charge in connection with the 2017 death of ANC Youth League leader Sindiso Magaqa was provisionally withdrawn against him.
Image: Thuli Dlamini

Addressing media outside the Umzimkhulu Magistrate's Court on Monday, where a charge of murder in connection with the 2017 death of ANC Youth League general secretary Sindiso Magaqa was provisionally withdrawn against him, Ndobe said he wouldn't go into the details of the case.

Ndobe, Sbonelo Myeza, 39, Mbulelo Mpofana, 34, and Zweliphansi Skhosana, 48, were charged after the state alleged that they had acted with "common purpose" in having premeditated the murder of Magaqa.

According to the charge sheet, the second and third counts related to the attempted murder of Jabulile Msiya and Nontsikelelo Mafa on July 13 2017, the same day Magaqa was gunned down.

However, on Monday, control prosecutor Sohana Moodley told the court that the state was provisionally withdrawing the charges against Ndobe and Skhosana.

"I am not prepared to say anything about the case. I have mixed feelings. I am relieved, but at the same time I am very emotional and very angry about it.

"I can be accused of anything, but definitely not murder or conspiracy to commit murder," Ndobe said. He added that he would consult his lawyers, as well as the leadership of the ANC, and would then issue a statement.