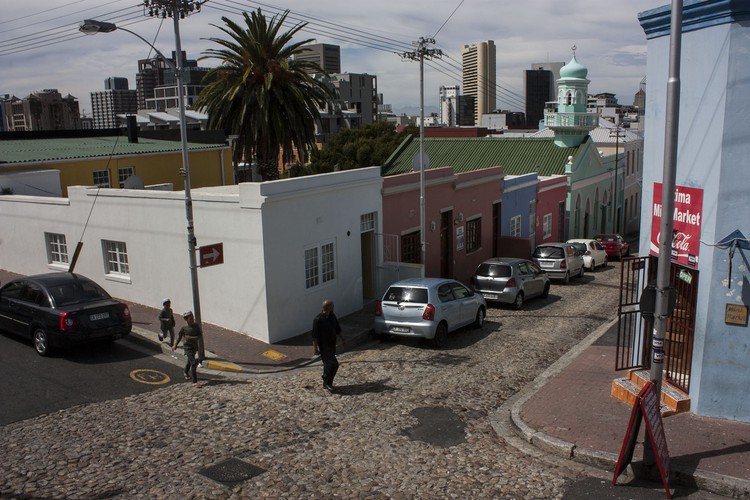 A new development, nicknamed the Monster Building and being opposed by Bo Kaap residents, is mooted to be built just the other side of this block on Rose Street. It is set to be 18 storeys high and would loom over the area pictured.
Image: Steve Kretzmann/WCN

A proposal to declare the Bo Kaap a heritage site sat on former mayor Patricia de Lille’s desk for three years, during which time four big developments were approved, according to the Bo Kaap Civic and Ratepayers' Association (Bokra).

Ward councillor Brandon Golding said former ward 77 councillor Dave Bryant had applied to the city council in 2013 to have the Bo Kaap put under a heritage protection overlay zone.

There was a public participation process and the heritage report was ready to go at the end of 2015, said Golding.

But while the report sat on the mayor’s desk, at least four major developments in the Bo Kaap were approved, two of which have sparked heated protest by residents.

The developments which were approved were:

However, De Lille denied that she had delayed the plan. "I’m not involved in the actual processes; it's the municipal planning tribunal," said De Lille.

South Africa is one of the most Instagrammble countries in the world.
Lifestyle
3 years ago

She said the Spatial Land Management Act which came into effect in June 2015 required the city to establish a planning tribunal with a 50-50 representation of city officials and "people from outside". As mayor, she was merely the appeals authority when it came to the planning tribunal.

The heritage plan was finally passed by the subcouncil on March 18 and is expected to get full council approval on Thursday March 28.

While heritage protection overlay zones are not normally retroactive and only apply to future development once gazetted, Bokra believes residents should not have to bear the negative impacts of possible fraud, collusion or corruption by city officials.

The association's spokesperson, Jacky Poking, says they have called on the city to order an independent investigation into why the Bo Kaap heritage zone was not processed for three years.

Poking said the submission for an investigation was made on February 9, in the presence of mayor Dan Plato, during an open day for public hearings on the heritage zone held at the civic centre.

About 350 ANC protesters shut down Wale Street outside the Western Cape provincial legislature in Cape Town during premier Helen Zille's state of the ...
News
2 years ago

The heritage zone proceeded rapidly through city bureaucracy after De Lille resigned from her post and from the DA following a spat with the party, but the city had to restart the public participation process as the delay meant it was out of date and could be legally challenged.

Golding said there was overwhelming public support for the heritage zone, which was "approved with accolades" at the subcouncil. The new public participation process, which closed on February 22, resulted in 2,298 responses from the public, of which 2,271, or 98.8%, were in support.

There were only six objections, while five supported it with qualifications, and two responses were comments that were neither supportive nor unsupportive.

Golding said he expected it "to fly through" council this week.

"When I took office in 2016 I started asking questions as to what had happened with the process," said Golding. "In the meantime, the 'monster building' between Rose and Buitengracht streets was being developed and there was opposition to that. There were court cases and objections and I was told the legal challenges affected implementation - but I don't think that was really true."

Cape Town’s “Malay quarter”, the Bo-Kaap, is on the fast track to getting heritage protection.
News
3 years ago

He said he had been "pushing through queries" about the heritage process since July last year.

Questions from GroundUp to the city, asking whether a preliminary investigation into the stalling of the heritage zone was being considered, as requested by Bokra, were not answered. The only response was that an update would be provided to the council on March 28. "As such, the city will not comment any further," said city spokesperson Priya Reddy.

An investigation by lawyers Bowman Gilfillan into allegations of misconduct in the city, tabled in October last year, contains a submission that De Lille instructed the environmental management department not to proceed with the Bo Kaap heritage application but to obtain her approval before commencing with heritage work.

Asked whether this was true, De Lille said Bo Kaap was not part of what Bowman’s had been mandated by council to investigate. She said the issue of the Bo Kaap heritage plan had been put there by "the white cabal" in the city to make findings against her.

She said a separate report by Bowman's had cleared her of wrongdoing, and thus she was fighting the findings against her in court. A court date for early April or May was expected.

• This article was first published by GroundUp. Produced for GroundUp by West Cape News.

A bank official was allegedly offered a R2m bribe to sell off one of SA's top hotels at a fraction of its value, according to a new claim in a ...
News
2 years ago

Hopes rise as dummy of new train rolls into Cape Town ... on a truck

Commuters at Cape Town station watched in excitement on Friday as a life-size mock-up of a new train arrived - by truck - ahead of the rollout of the ...
News
2 years ago

The deputy mayor of Cape Town refused to meet housing activists who occupied a Cape Town golf course on Thursday.
News
2 years ago