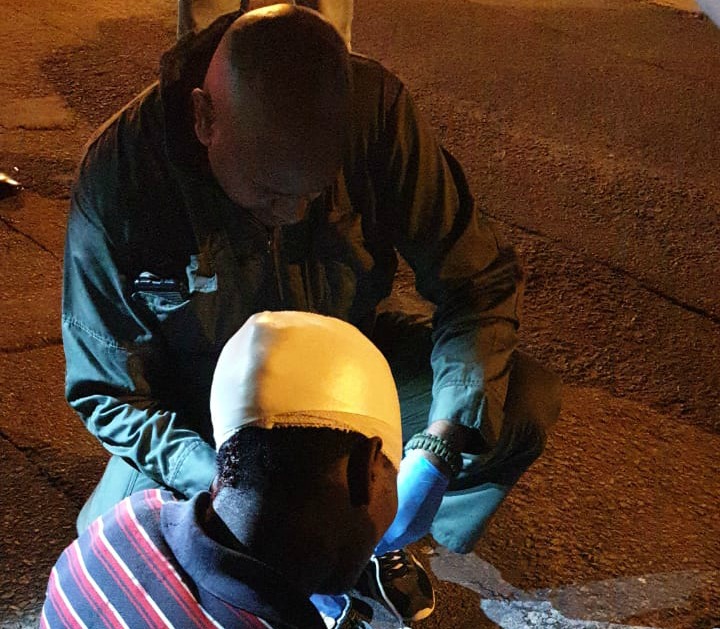 A paramedic working with the Mayville community policing forum assists a man who sustained an injury during alleged xenophobic violence on Tuesday in Sydenham, Durban.
Image: Imtiaaz Syed

There were reports of an outbreak of xenophobic attacks at the Jadhu Place informal settlement in Springfield Park, Durban, late on Tuesday night.

While details were still scarce, Mayville community policing forum (CPF) chairperson Imtiaaz Syed said that two foreigners sustained injuries. Close to 20 others had been instructed to seek refuge at the Sydenham police station, he added.

"We saw a group of women forming at about 30 minutes before the attacks. One person sustained an open wound to the head and was treated by one of our CPF paramedics on scene.

"We have informed the Mayville police and they will deploy their [officers] to circle the area to hopefully quell any brewing tensions," he told TimesLIVE on Tuesday night.

Attempts to get comment from KwaZulu-Natal police were not successful on Tuesday night.

The violence comes after a similar outbreak in Durban earlier in the day, which also saw foreign nationals having to seek shelter in a police station.

With just the clothing on their backs, a group of foreign nationals fled from their homes in Durban to seek shelter in a police station when they ...
News
3 years ago

Police and officials begun looking for a municipal hall on Tuesday afternoon to house foreign nationals who were displaced during a "xenophobic ...
News
3 years ago