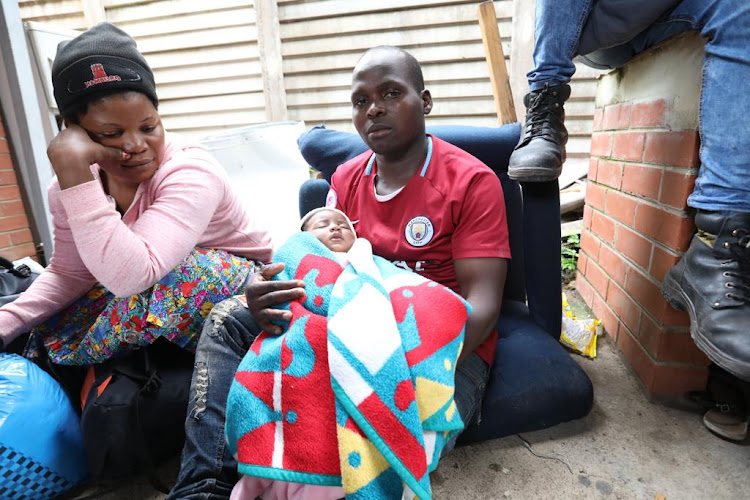 Malawian Austin Gombera with his sister Fatima James and her baby Sheila. They fled their home on Monday night after xenophobic attacks in Durban.
Image: Jackie Clausen

Police and officials have begun looking for a municipal hall on Tuesday afternoon to house foreign nationals who were displaced during a "xenophobic attack" at a Durban informal settlement.

Fifty people including five babies fled to the Sydenham police station when their unemployed neighbours in the Burnwood informal settlement kicked down their doors at 2am.

By midday, the number had swelled to more than 105 people.

While community members rallied around the group to provide meals, police and city officials scrambled to find shelter for the evening for the group.

"We are looking for a council-run hall so they have somewhere to stay tonight. We are confident that we will find something," said Sydenham community policing forum spokesperson Satish Dhupelia.

Stanley Chilembu from Malawi told TimesLIVE that the displaced group was "left with nothing".

"Some people fled without even their shoes. There are people here who are barefoot, who have left everything. We know that the protesters have broken into our houses and have taken everything.

"Now we just pray that we have somewhere to stay tonight," he said.

It is believed that angry, unemployed residents stormed shacks belonging to foreign nationals because they were employed by locals.

KwaZulu-Natal police said residents were protesting at the Burnwood informal settlement in Sydenham at 2am.

"They were forcing the foreign nationals out of their homes. No one was injured or assaulted. Police had to intervene and monitor the situation," said Lt-Col Thulani Zwane.

With just the clothing on their backs, a group of foreign nationals fled from their homes in Durban to seek shelter in a police station when they ...
News
2 years ago

Truck drivers, operating in the vicinity of the Durban port, were caught in a blockade by a group of protesters on Monday.
News
2 years ago