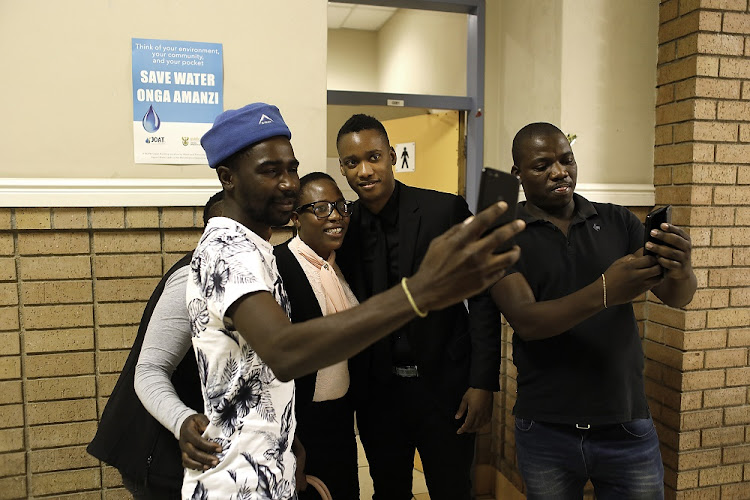 Duduzane Zuma is appearing before the Randburg magistrate's court in Johannesburg this week to answer to charges related to a 2014 car crash.
Image: Alon Skuy

Human error could have led to the crash involving former president Jacob Zuma's son Duduzane in which one person died and another one passed away later.

That is what road accident expert Johann van Loggerenberg told the Randburg magistrate's court in Johannesburg on Wednesday.

Zuma is facing one count of culpable homicide and one of negligent driving after crashing his Porsche into a minibus taxi on the M1 South in Johannesburg on February 1 2014.

One charge of culpable homicide was dropped on Tuesday.

Phumzile Dube and Jeanette Mashaba died following the crash. But state prosecutor Yusuf Baba told the Randburg magistrate's court on Tuesday that the state consulted with a pathologist and Mashaba's death was a result of a pre-existing condition and was not linked to the accident.

She sustained injuries in the crash and died in hospital several weeks later.

Van Loggerenberg is now retired, but started working for the Johannesburg metro traffic police's accident unit in 1982, where he was still working in 2014.

Everything you need to know about Duduzane's first day in the dock.
News
3 years ago

The crash happened around 10pm. Van Loggerenberg was called to the scene at 10.55pm and arrived at the scene at 11.50pm after attending to another crash.

Zuma pleaded not guilty on Tuesday. He said in a statement read out by his lawyer, Mike Hellens, that he lost control of his Porsche 911 turbo with four-wheel drive after driving through a pool of water which he did not see due to the poor visibility from the rain.

Van Loggerenberg testified that most drivers either brake or accelerate when a car starts sliding, which would exacerbate the aquaplaning.

He said about the 2014 crash: "The human could have made an incorrect decision leading to an incorrect action."

Van Loggerenberg also said he saw no puddled water en route to the scene and it takes about 2.5mm of water for a car to possibly aquaplane.

Van Loggerenberg added that if the Porsche aquaplaned, the tyres must have been smooth.

During cross-examination, Van Loggerenberg conceded that aquaplaning and smooth tyres are not mutually exclusive.

Van Loggerenberg agreed with another expert in a joint report which Hellens presented to the court showing that the Porsche and its tyres were roadworthy.

Did the taxi spin, or didn't it? This was one of the key questions on the first day of Duduzane Zuma's culpable homicide case on Tuesday.
News
3 years ago

One of the taxi passengers, Matron Noni Mdakane, 73, said on Tuesday that she had alerted the taxi driver, Vusi Dlamini, shortly before the crash to watch out for Zuma's car, which she said was making its way across the road.

"I shouted out to the driver and asked whether he could see this motor vehicle, which seemed like it was going to injure us," Mdakane testified. "The driver responded and said he could see it. The motor vehicle then passed. As soon as it had passed, it then turned [spun] around and it went backwards. That is when it collided with the taxi."

Dlamini told the court he only saw lights and the next moment his Toyota HiAce spun two or three times before he lost consciousness.

The rain impaired his visibility and he could see three or four car lengths ahead of him just before the crash.

He told the court there were few cars on the road and he was driving in the second lane from the left on a four-lane road.

Former president Jacob Zuma’s son Duduzane is in the dock on Tuesday in his culpable homicide trial relating to the death of Phumzile Dube, 30, when ...
News
3 years ago

Social media users have expressed shock that a case of culpable homicide has been withdrawn against former president Jacob Zuma’s son, Duduzane.
News
3 years ago

Corruption charges against Duduzane Zuma were halted in the Johannesburg Specialised Commercial Crime Court on Thursday to allow a key witness to ...
News
3 years ago