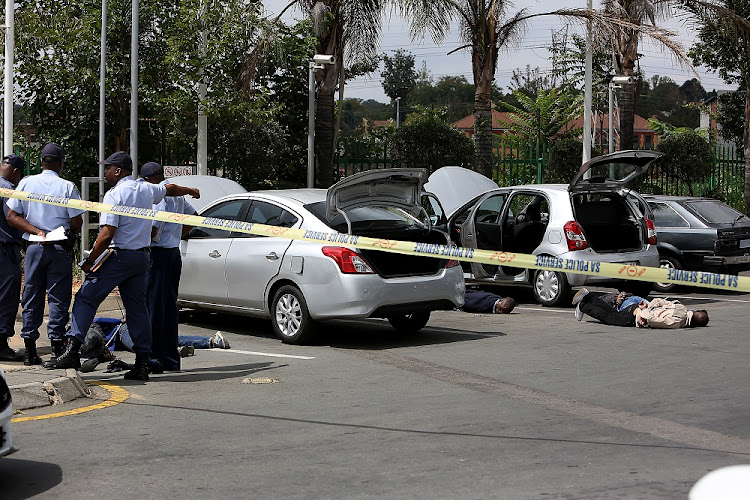 Five robbery suspects lie on the ground at the BP garage on Corlett Drive, outside the upmarket Melrose Arch lifestyle centre, on March 27 2019.
Image: Alon Skuy

Five people have been arrested after police foiled a robbery outside a BP petrol station on Corlett Drive near the Melrose Arch lifestyle centre, Johannesburg, on Wednesday.

Cpt Mavela Masondo told TimesLIVE that police had earlier received a tip-off about the plans to rob the petrol station, which also houses a Pick 'n Pay express outlet.

"The suspects matching the description [given to the police] were then seen at the garage," said Masondo.

"As police approached the group, one of them pulled out a firearm."

Police fired warning shots as the group tried to flee the scene.

"One of them was shot in the leg," Masondo said.

Police were still processing the scene at around 12.30pm.

Masondo said a vehicle that the suspects had been travelling in had recently been hijacked.

Five suspects will appear in the Johannesburg Magistrate’s Court on Monday following their arrest after police foiled a robbery at a clothing store ...
News
2 years ago

Police have arrested three men and a woman after they were found in possession of firearms and ammunition.
News
2 years ago