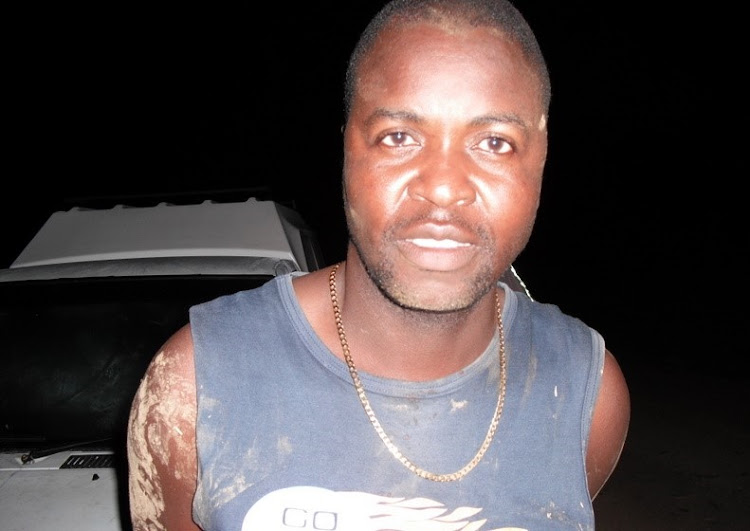 Muntugogkwakhe Khoza, a 50-year-old builder from the Ulundi district, has been jailed for rhino poaching
Image: Tony Carnie

A notorious rhino poacher, who dragged out his court trial for nearly 10 years, is back behind bars to serve a lengthy new jail term – but two of his accomplices walked free on March 26 after paying “slap on the wrist” monetary fines that have shocked senior wildlife conservationists.

Muntugogkwakhe Khoza, a 50-year-old builder from Ulundi, maintained his innocence to the end, but Durban regional court magistrate Logan Naidoo rejected his “repeated lies” and attempts to delay the trial. Naidoo sentenced him to 14 years in prison at the conclusion of a trial that lasted almost a decade.

However, two accomplices – 51 year-old SANDF soldier Mduduzi Xulu and 39-year-old Ekurhuleni municipality driver Ayanda Buthelezi – escaped with suspended jail sentences and a fine of R8,000 and R6,000 respectively. They were arrested at a roadblock soon after another white rhino was slaughtered in the Hluhluwe-iMfolozi game reserve in August 2009.

Police officers and SA National Parks (SANParks) rangers have in the past two weeks arrested 12 people linked to poaching in the Kruger National Park.
News
2 years ago

A fourth suspect jumped bail during the trial and is still at large. Nearly 7,000 rhinos have been slaughtered by poachers nationwide since 2008.

The white rhino population in South Africa’s flagship Kruger National Park has also been cut in half from poaching over the last decade and rhino poaching has also been declared a national priority crime to safeguard the country’s rhino herd from unprecedented rates of illegal slaughter.

Reacting to the outcome on Tuesday night, senior conservationists welcomed the conviction and sentence for Khoza, but expressed frustration that a seemingly clear-cut case had dragged on for so long. They also slammed the apparent lenient sentences for Khoza’s accomplices.

“This trial should never have been allowed to drag on for so long and we hope that other outstanding rhino poaching cases in KwaZulu-Natal will now be dealt with as quickly as possible,” said Chris Galliers, co-ordinator of the Project Rhino initiative.

Galliers, a senior member of the Game Rangers Association of Africa, said local rangers were placing their lives on the line to protect rhinos and other species of wildlife from determined gangs of armed criminals, and were hoping for stronger support from the judiciary.

Dr George Hughes, former head of the Ezemvelo KZN Wildlife conservation agency, said he was “dreadfully disappointed” by the sentences for Xulu and Buthelezi, likening their penalties to those for petty shoplifting at a supermarket.

“I think these sentences are unfortunate given the national rhino poaching crisis and the hundreds of millions of rands it has cost the economy for increased protection measures in state and private reserves,” he said.

Rhino poacher on the run – exactly nine years after the crime

A Richards Bay magistrate has issued a warrant for the arrest of an alleged rhino poacher exactly nine years after he was apparently nabbed ...
News
2 years ago

Dr Richard Emslie, a senior scientist and member of the African Rhino Specialist Group of the International Union for the Conservation of Nature, said the sentences did not appear to match the economic cost of the crime.

Emslie, the main author of a new expert report on the current status of Africa’s rhinos, said the economic value of white rhino in South Africa had dropped by 58% over the last decade because of the poaching crisis, representing a combined loss of more than $711m to the country – or roughly R1m per animal.

“Seen in this context, a fine of around R1m for a trafficking seizure involving poaching of multiple animals is well below the economic cost of the crime,” he said in his report.

While the presiding magistrate had the discretion to impose sentences he felt were appropriate, Emslie said it was clear that the sentences for Xulu and Buthelezi were not commensurate with the estimated economic losses to South African wildlife conservation and tourism.

Yuri Gangai, the senior state advocate who handled the case, also appeared crestfallen over the sentences for Xulu and Buthelezi, having earlier urged the magistrate to send both men to jail for 15 years and 12 years respectively.

Gangai recalled evidence that blood spray patterns at the crime scene indicated that the horns were hacked off the animal while it was still alive.

He suggested that while Buthelezi - a driver employed by the Ekurhuleni municipality in Gauteng at a salary of R15,700 per month - had not participated in the actual hunting, he had nevertheless been hired to pick up the poachers and transport the horns.

“He is as guilty as the others in his role as the driver of a getaway car in a bank robbery”, Gangai had argued.

Xulu, a member of the SANDF stationed at 121 Battalion at Mtubatuba, was paid by the taxpayers to protect them and the assets of the nation – but he had betrayed their trust, argued Gangai.

Khoza, the apparent gang leader, is now set to serve another 14 years in jail after being convicted of another rhino horn crime in 2013 in Utrecht – and still faces further charges for allegedly hunting rhinos in the Paulpietersburg district in September 2018 while awaiting trial for the first Hluhluwe-iMfolozi rhino poaching case in 2009.

Appealing for leniency, Khoza told the court he was the sole breadwinner for 11 children from five wives.

Meet the adrenaline-junkie poacher hunter and her loyal side-kick, Blu

"I'm not actually sure how it happened … It's just one of those things that unfolded in front of me."
News
2 years ago

While there was good news in the fight against rhino poaching, the news for the country’s elephants was not as promising.
News
2 years ago
Next Article