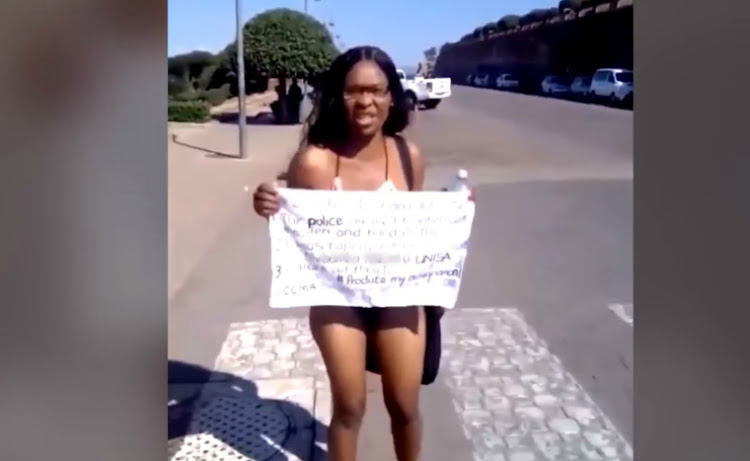 Gugu Ncube outside the Union Buildings in Pretoria on March 13 2019 during her ‘nude’ protest. Ncube claims a board member of Unisa’s Centre for Early Childhood Education (UCECE) sexually harassed her.
Image: Screenshot/MultimediaLIVE

The University of South Africa (Unisa) has appointed an external firm to review its investigation into the alleged sexual harassment of its former employee, Gugu Ncube.

"The university engaged with various internal and external stakeholders to establish how best to assist the complainant [Ncube], given the difficult emotional period she is clearly going through; as well as bring closure to this matter," the institution said in a statement.

Ncube had accused the institution of turning a blind eye to her case, and embarked on a semi-naked protest outside the Union Buildings in Pretoria two weeks ago in an attempt to address President Cyril Ramaphosa.

The Commission for Gender Equality (CGE) will investigate alleged sexual harassment at Unisa after Gugu Ncube was arrested outside the Union ...
News
3 years ago

During the protest she carried a placard claiming that police were "used to intimidate, threaten and harass" her. She also wrote the name of her alleged rapist.

Ncube was then arrested by several female officers who forcefully removed her from the Union Buildings.

"Subsequently, the university appointed an external legal firm to independently assess whether the internal investigation of the complaint by the university was done properly; and advise on the necessary remedial action should the assessment establish that the matter was not handled adequately," Unisa said in Thursday's statement.

Police on Wednesday arrested a former Unisa employee for a semi-naked protest outside the Union Buildings in Pretoria - but many are unhappy at how ...
News
3 years ago

The appointed legal firm had already commenced with the task, and its scope included engaging with all the affected parties, according to the institution.

"Upon the finalisation of this assessment, the university undertakes to share the outcomes with all stakeholders," said Unisa.

The Commission for Gender Equality (CGE) is investigating Ncube's case against a Unisa employee who served on the board of trustees of the Unisa Centre for Early Childhood Education.

CGE's spokesperson Javu Baloyi said, "Our investigations are still under way. There is a bit of a delay because Gugu [Ncube] has three other cases at the CCMA, but we are doing our best to ensure that the case moves speedily."