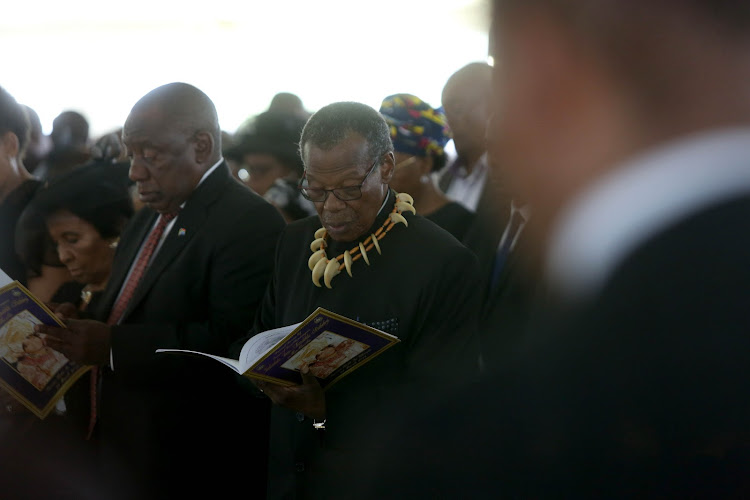 The Archbishop of Cape Town, Thabo Makgoba, arts and culture minister Nathi Mthethwa and higher education minister Naledi Pandor were also among the mourners, as were business mogul Nicky Oppenheimer and his wife Strilli, who travelled from the UK to be at the funeral.

Also in attendance were Zulu King Goodwill Zwelithini's wives and other members of the Zulu royal family.

The Zulu monarch did not attend the funeral in accordance with tradition that prevents him from being present.

The princess was ushered into the venue in a white coffin with gold handles, carried by members of the Buthelezi family.

Most members of the bereaved family carried white flowers which were placed next to the coffin.

Princess Irene, described as the "beloved" wife of the veteran politician, died after a long illness.

She leaves behind her husband of 67 years and their children, Prince Ntuthukoyezwe Zuzifa, Princess Phumzile Nokuphiwa and Princess Sibuyiselwe Angela, as well as many grandchildren.

She attended Anderson Street Primary School and completed her secondary schooling at Orlando High School where she was taught by well-known educationists such as Prof Khabi Mngoma, Thami Kambule and ABC Motsepe - the father of Patrice Motsepe - Dr Tshepo Ramaphosa and Bridgette Radebe.

Social media has been flooded with tributes for Irene Audrey Thandekile Buthelezi, the wife of veteran politician Mangosuthu Buthelezi who died on ...
News
3 years ago