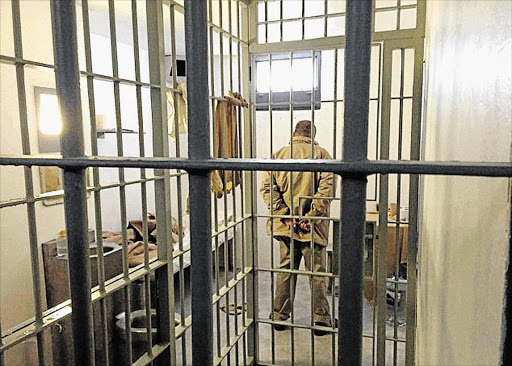 Barnard was sentenced to life imprisonment in 1998 after being convicted on numerous charges, including murder, attempted murder, defeating the ends of justice and unlawful possession of firearms.
Image: Carlos Loret de Mola/Twitter

The department of correctional services on Tuesday confirmed the release on full parole of apartheid-era hitman Ferdi Barnard.

Barnard was sentenced to life imprisonment in 1998 after being convicted on numerous charges including murder, attempted murder, defeating the ends of justice and unlawful possession of firearms.

“I can confirm that he was indeed released today. There are conditions associated with his parole, which I cannot disclose, they are between him and the department,” said correctional services spokesperson Singabakho Nxumalo.

Almost a decade after the crime, Barnard was convicted for the killing of anti-apartheid activist and Wits University academic David Webster.

Barnard shot Webster outside his home in Troyeville, Johannesburg, in May 1989, at the behest of the apartheid defence force's security branch, the Civil Co-operation Bureau (CCB). The CCB told Barnard that Webster, a pacifist, was involved in terrorist activities.

After 10 years of freedom, fraudster insists he's still very ill, and his doctor stands by his original diagnosis
News
2 years ago

Justice and correctional services minister Michael Masutha said last month that he had satisfied himself that Barnard met all requirements for parole.

The justice department said that as part of the consultations before finalising his decision, Masutha "personally engaged with" Maggie Friedman, Webster’s partner.

"After raising her concerns with minister Masutha, Ms Friedman indicated that she had no objection to the placement of Mr Barnard on parole," the department said in a statement.

In terms of section 136(3)(a)(b) of the Correctional Services Act, an offender serving a life sentence is entitled to be considered for day parole or parole after having served 20 years or more of their life sentence.

The department said the profile of such an offender must be submitted to the National Council for Correctional Services (NCCS), which must make a recommendation to the minister regarding the placement of the offender on day parole or parole.

In terms of the act, the minister has discretion, if the NCCS has made a favourable recommendation, on whether to confirm the offender on parole.

Barnard has served more than 20 years of the life sentence imposed in 1998.

He was first considered for parole by Masutha on August 29 2016 and a further profile was requested pending, among others, the conclusion of victim-offender dialogues with all identified victims.

Last month, the department said this did not mean the end of Barnard's life sentence.

"He has been transferred to the community corrections office, which will supervise and monitor him as he will be serving the remainder of his sentence in the community for the rest of his natural life."

Ferdi Barnard, the man who shot and killed anti-apartheid activist Dr David Webster in 1989, will be placed on full parole from April 2.
News
2 years ago

"I've been shot by a shotgun, get an ambulance." These were the last words Maggie Friedman heard from her partner, anti-apartheid activist David ...
News
6 years ago