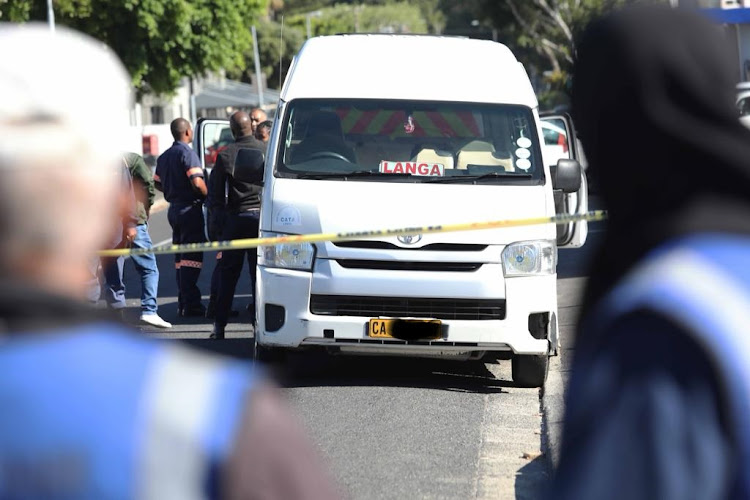 Investigators comb the crime scene for evidence after a taxi shooting in Cape Town on Tuesday.
Image: Sunday Times/Esa Alexander

The taxi industry has blamed the spate of fatal shootings and ongoing disputes over Cape Town routes on rogue taxi operators.

Taxi unions Codeta and Cata spoke out on Tuesday after six people had died in a hail of bullets in two weeks. One person was shot in Hout Bay last week, and four others were killed in the area after about 70 shots were fired on Monday morning.

On Tuesday morning, police forensics searched for clues in Athlone after another person was found dead in a taxi.

Besuthu Ndungane, spokesman for Codeta, blamed the violence on a disputed taxi route in Hout Bay that was phased out to make way for Cape Town’s MyCiti bus service.

Ndungane said the conflict was between taxi associations affiliated to Codeta and Cata.

A man was found shot dead in a minibus taxi at Sybrand Park in Cape Town on Tuesday.
News
3 years ago

He blamed the violent flare-ups on the city, and said the feisty competition between taxis was caused by a lack of government support for the industry.

"The reason for the violence is the failure of the city's law enforcement to ensure that no taxis operate on that route," said Ndungane.

"As long as taxi owners are not subsidised to transport the public, such violent conflicts will continue. Everyone wants to put bread on the table. We also emphasise that violence is not a solution to any conflict. As an association, we have an open door policy and we encourage negotiation," he said.

On Monday, transport MEC Donald Grant said "transport and law enforcement authorities convened an urgent meeting of the transport priority committee where a commitment was made to intensify enforcement activities in the affected area while the situation remains tense".

Grant said the illegal operation of the contentious route, which has resulted in "sporadic clashes between the two associations", has been going on for a few years.

But Ndungane said: "We have noticed that the MEC has mentioned in the media what he thinks is the cause of the violence but he said nothing about his interventions. We haven't received an invitation from his office, we are being killed but he is not talking to us."

Three police officers attached to the KwaZulu-Natal taxi violence unit are behind bars following their arrest in Pinetown.
News
3 years ago

"A person's life is priceless and as the taxi industry we took a decision that there will never be violence again in this province," said Soyama. "But there are people linked to the taxi industry who do illegal things that tarnish the entire industry. We have to get to the root of the problem."

Mandla Mata, the Western Cape chairperson of the Alliance for Transformation for All, a newly formed taxi industry-based political party, said his organisation was unable to deal with the taxi violence as it is still busy setting up the party.

"Taxi issues are handled by the associations. As soon as the party is fully fledged we will set up a committee that will look into these challenges," said Mata.

Hout Bay residents were startled on Monday morning as gunshots ripped through the coastal suburb.
News
3 years ago

The Public Protector said on Wednesday that the department of transport and Toyota South Africa had failed to protect taxi commuters as they did not ...
News
3 years ago

A driver and a school principal are to be charged with overloading a minibus taxi after 65 pupils were found crammed into the vehicle.
News
3 years ago