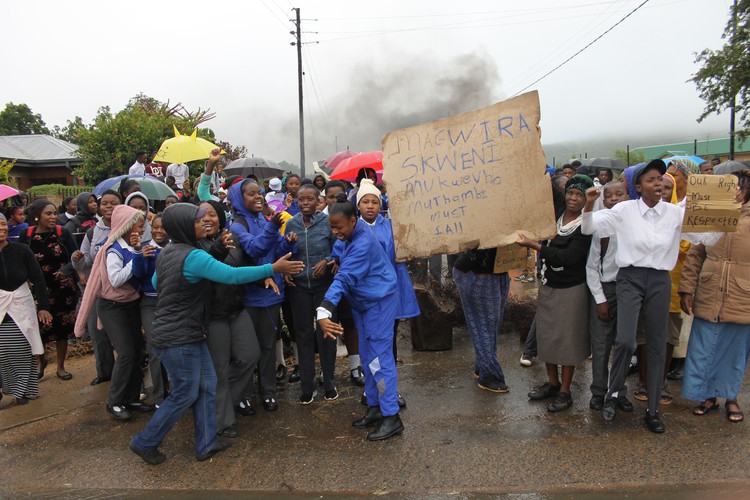 Parents of pupils at Tshikota Seconday School in Limpopo shut down the school on Tuesday calling for the firing of four teachers whom they accuse of not teaching their children. They also accused the school of failing to give pupils reports for the last term.

The school was re-opened on Wednesday.

Parents say the teachers sit in the staff room and visit classes only to give tests.

When GroundUp visited the school the street leading to the entrance was blocked by branches, stones and burnt tyres. The entrance to the school premises was also closed.

Some pupils had gathered in one classroom to support the parents’ demand.

"We have not received our children's latest term reports. This kind of thing should not be allowed at our school," said Mabobo Patrick Ndwamato, chairperson of the school governing board.

According to Ndwamato the four teachers failed to submit the subject marks for moderation, resulting in the school not preparing reports for last term.

"We decided to close the school until the teachers are replaced. We do not want to see those subject teachers at our school again," said Ndwamato.

Mpi Tshilongamulendzhe, whose child is in grade 8, said: "My child told me some of the teachers do not come for lessons. They only come and give them tests. These teachers should be fired immediately."

Another parent, Stella Magesa, whose child is in grade 10, said last year parents had complained to the education authorities and had been told the replacement of the teachers would be a long process. "Today we decided we should not wait. We decided to close the school until the matter is resolved."

A grade 10 pupil who was supporting the parents said: "Most of the time we call these subject teachers but they do not come for the lessons. They will be in the staff room."

The SGB held a meeting with the education sector manager on Tuesday and agreed that the teachers concerned report to the manager while the matter is being looked into.

After the chairperson of the SGB addressed the parents and pupils, teachers, except for the four concerned, were allowed into the school yard.

Gauteng education MEC Panyaza Lesufi on Tuesday ordered a principal of a primary school in Alberton to attend a diversity and social cohesion course.
News
2 years ago

WATCH | Blessed! - Teacher who gives most of his earnings to the poor wins R14m prize

Kenyan teacher Peter Tabichi has been using as much as 80 percent of his salary to support those in need, and said he would use his R14m prize money ...
News
2 years ago

Rustenburg Girls' Junior School in Cape Town, which was embroiled in a race row for firing its only black teacher, is getting a black principal.
News
2 years ago