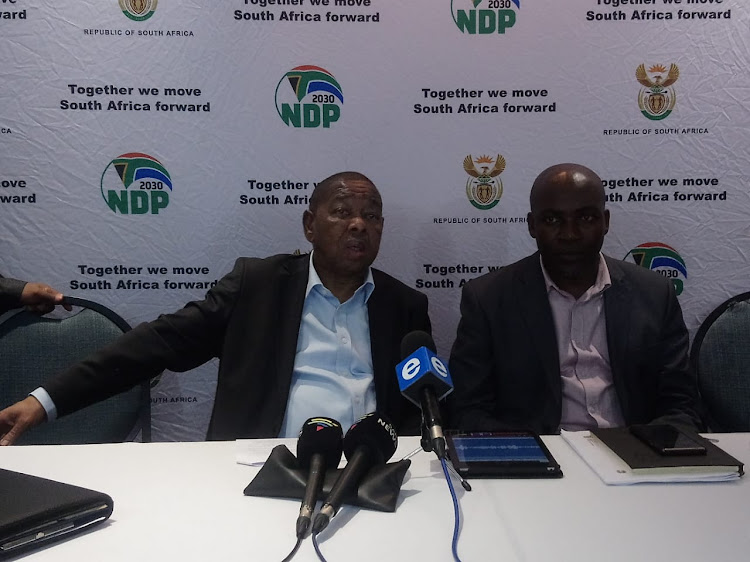 Transport minister Blade Nzimande and KZN transport MEC Mxolisi Kaunda ahead of their press briefing with the media in Durban on April 4, 2019.
Image: Orrin Singh

Transport minister Blade Nzimande has dismissed claims that there is a shortage of truck drivers in SA that require "rare skills" - a claim which has led to the trucking industry hiring foreign nationals.

Nzimande addressed the media in Durban on Thursday amid ongoing negotiations with truck owners and truck driver associations following a spate of volatile protests. Trucks were burnt on the N3 freeway in KwaZulu-Natal, affecting thousands of motorists, during the protest action.

The protests stemmed from the alleged hiring of foreign drivers in the transport industry.

He emphasised that the dispute was solely between employers and employees of the trucking industry and was one that need to be addressed by the department of labour moving forward.

Ministers in closed-door meeting over fiery trucks protests in Durban

Three ministers are locked in a discussion with truck drivers at the Durban Central Police Station on Wednesday.
Politics
2 years ago

Nzimade listed some of the key recommendations that were compiled by the task team.

"There must be an enhancement of existing law enforcement operations by the various departments. There must also be workshops and security plans on how to enforce what are essentially our laws which include labour laws as well as other laws that relate to employment of workers and in particular employment of foreign nationals."

He added that the proper processes should be followed in terms of such laws.

"There must be proof that the skills we are importing are scarce and not to be found. We don't believe that that is a shortage of skills as far as truck drivers are concerned. Let's say there were for the sake of argument, it's not rocket science to actually train truck drivers.

Some other key recommendations made by the government- led task team were:

• Unannounced regular visits and inspections to the premises' of truck owners, operators and logistic companies.

• The strengthening of the process of validation and verification of immigration and visa documentation - including work permits and foreign drivers' licences.

• The department of labour and home affairs must provide feedback on their analysis and impact of foreign nationals living or working in SA.

Siphesihle Muthwa of the National Truck Drivers Federation said he distanced himself from the fiery protests along the N3, saying that as an organistation they would never fuel such violence.

He said South African truck drivers had the skills and yet were sitting at home unemployed.

Muthwa painted a grim picture of foreign national truck drivers, listing a number of fatal accidents that they were responsible for.

He concluded by reminding the media about the incident on Fields Hill in Pinetown, Durban, when 21 people were killed when Swazi national Sanele May ploughed into a number of vehicles, an incident which made international headlines and resulted in May receiving an eight-year prison sentence.

Kwazulu-Natal MEC for transport, community safety and liaison Mxolisi Kaunda concluded by praising the ministers of police, home affairs and transport who all convened in Durban on Wednesday and Thursday to resolve the matter.

Government has vowed to explore the question of whether certain truck-driving positions require expertise that could be deemed "rare or scarce" in ...
News
2 years ago

A group of men armed with sticks, sjamboks and iron rods blockaded the N3 near Mooi River to force truck drivers out of their vehicles in the early ...
News
2 years ago

Truck drivers, operating in the vicinity of the Durban port, were caught in a blockade by a group of protesters on Monday.
News
2 years ago