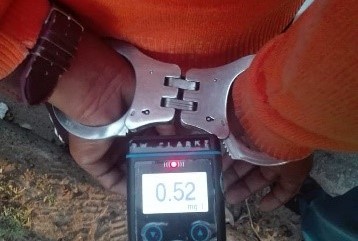 A Cape Town taxi driver was slapped in handcuffs on April 8 2019 after giving a breath sample with five times more alcohol than the law allows.
Image: City of Cape Town

Two of the drivers had alcohol of around five times the legal limit in their breath samples, and the other was nearly twice the limit.

The trio were carrying 58 passengers between them, said JP Smith, the City of Cape Town mayoral committee member for safety and security.

The drivers were stopped at a checkpoint in Jakes Gerwel Drive, near Viking Way, in Epping.

"At 7.05am, officers arrested a 26-year-old driver from Philippi who was transporting 27 passengers from Manenberg to Century City. His breath-alcohol sample was 0.45mg/l," said Smith.

Breathalyser readings taken on the spot will be used in evidence in court instead of blood tests, says transport minister.
News
2 years ago

"The legal limit for drivers with public driving permits is 0.1mg/L, which meant that he was nearly five times over the legal limit. The driver was also served with 17 outstanding warrants.

"Moments later, a 27-year-old driver from Khayelitsha was stopped, transporting 21 passengers on the same route. His breath-alcohol level was 0.52mg/l, more than five times the legal limit.

"At 7.40am, a 24-year-old taxi driver from Nyanga East was stopped. He had 10 passengers in the vehicle on route from Nyanga to Goodwood. The driver’s breath-alcohol sample was found to be nearly twice that of the legal limit."

Smith said the drivers were taken to Pinelands police station and their vehicles were impounded — two for operating without a valid permit and one for operating contrary to the conditions of its permit.

Smith said he was left speechless by the number of drink-driving arrests among taxi drivers. "There is no question that our enforcement agencies are doing the work; the arrest statistics vouch for that," he said .

"It’s the conviction statistics that are lagging, because why else would people continue to act with reckless abandon?"

More than 130 arrested for driving drunk in Gauteng... in one weekend

At least 1,100 people were arrested and 21 illegal firearms seized during crime prevention operations in Gauteng over the weekend.
News
2 years ago

The Tshwane mayor had an altercation with a man about drinking.
News
2 years ago

A minibus taxi driver who answered the call of nature in public was arrested for drunk driving in Cape Town.
News
3 years ago