'We have decided to take it and are prepared to fight for it': land occupation starts in Strand 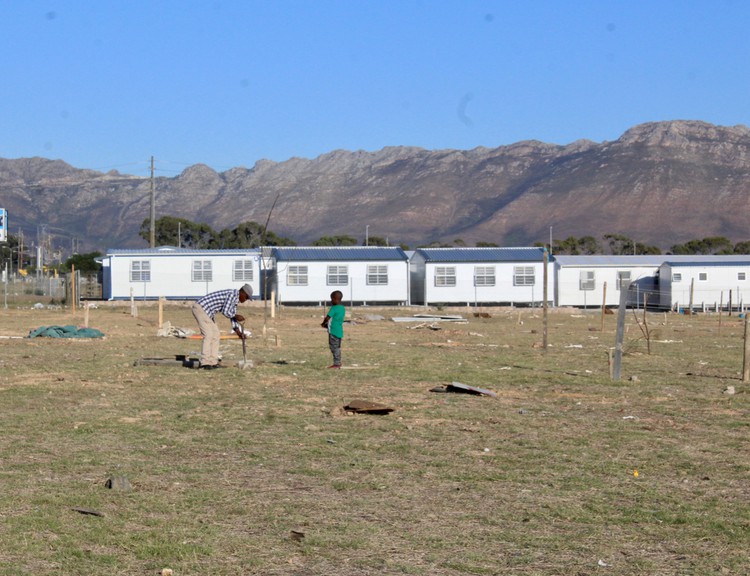 A man and his son mark out a plot on vacant land in Strand.
Image: GroundUp/Velani Ludidi

Backyarders in Strand have begun to mark out plots on vacant land opposite the N2 near Reddam House school.

Residents say the privately owned land, belonging to ASLA Construction, has stood vacant for more than a decade.

I never received an [RDP] house when they were built. I was told I never registered for a house," said Nokuzola Nogwanya, who is 78, and lives in a shack in Lwandle. "We are not being disrespectful here, but are asking for this land since it is not used."

Nkosithandile Mbovu, who lives in a shack in Nomzamo, said, "We have asked for this land for a very long time and no one said anything to us. As the people now, we have decided to take it and are prepared to fight for it. There is a need for land in this province which is kept by business people. ASLA is a construction company which came here to build houses … How they acquired the land we do not know."

ASLA CEO Werner Jerling said, "The land in question is actively managed and monitored, and we were aware of the marking of the land from the first event earlier last week. Since then, we have removed the markings a number of times.

"As a private landowner, we became aware that the markings constitute more than a casual interest by others and have accordingly obtained a court interdict against persons with any form of illegal intent on the land."

Werner did not respond to GroundUp’s question about what it planned to do with the vacant land.

Local councillor Jongidumo Maxheke said people had not consulted him before taking action. "I do not know what is happening because no one came to me and said anything. I will give comment after meeting with the people," he said.

There are as yet no structures on the land.

‘That was all lies’: Family land ends up in the ‘wrong hands’

A KwaZulu-Natal land claimant is seething, saying a piece of land he claimed from the government – which includes a number of farms in the towns of ...
News
3 years ago

Zimbabwe is to start paying compensation this year to thousands of white farmers who lost land under former president Robert Mugabe's land reform ...
News
3 years ago

10,000-student TVET college campus to be built on Cape Flats

A new college campus that will eventually accommodate 10,000 students is to be built in Cape Town, mayor Dan Plato announced on Saturday.
News
3 years ago