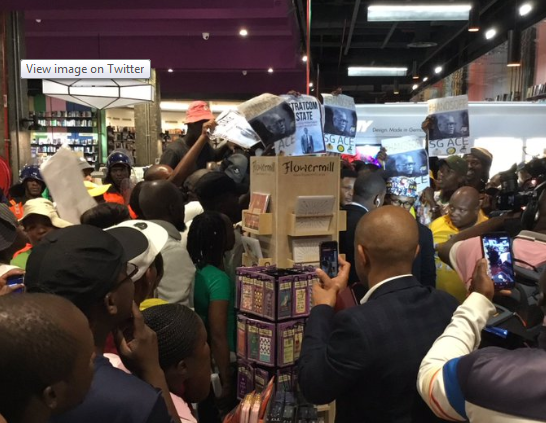 The protesters shouted at customers, telling them: “Go! Go! Why are you prosecuting Ace Magashule? They can’t call us [k-word] any more; now they call us corrupt!”

Protestors getting more worked up, shouting at customers and attendees at launch that they must “Go! Go! Why are you prosecuting Ace Magashule? They can’t call us (k-word) anymore, now they call us corrupt!” #AceMagashule #GangsterState @PLMyburgh pic.twitter.com/4TivfP40sS

The publishers of the explosive book, which implicates Magashule in state capture, earlier said they were unshaken by threats of legal action over the contents of the book.

"We further note Mr Magashule's threats to pursue legal action over the contents of the book. We will oppose any legal action that seeks to hide essential facts from South Africans about how our government is really being run," said Surita Joubert on behalf of Penguin Random House South Africa.

The book details Magashule’s murky dealings as a struggle activist in the 1980s and later as premier of the Free State - and his rise to one of the ANC's most influential positions.