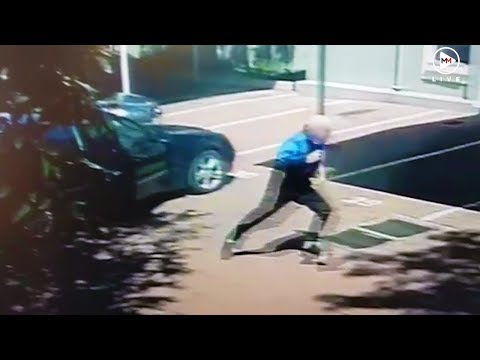 CCTV footage has emerged of the moment a man was gunned down in an apparent hit in Johannesburg on Tuesday.

The 59-year-old Ivan Djordjevic was shot several times after driving into his complex in Bryanston around noon.

He was tailgated into the complex by two men in a BMW who opened fire on Djordjevic's Mercedes-Benz. In the footage, Djordjevic leaps out of the vehicle and attempts to flee but is gunned down a few metres away. The two men jump back into the BMW and flee the scene.

PODCAST: What have political parties promised to do about crime?

"The suspects then accosted the victim and shot at him using a rifle. The victim died on the scene. The motive for the murder is unknown at this stage but police are investigating," said police spokesperson Capt Mavela Masondo.

The suspects dumped the vehicle and torched it.

Suspects in a BMW opened fire on a man with an R4 rifle in the Highbury complex in Bryanston. Victim believed to be of Eastern European descent. Suspects ditched their car and set it on fire. @TeamNews24 pic.twitter.com/3MhRQVBcsX

News24 reported that Djordjevic previously survived a hit when he was ambushed while parked at a KFC in Bedfordview in September 2017. The gunmen opened fire on his vehicle and he was hit four times. He spent several months in hospital and part of his jaw was damaged.

"The police are appealing to anyone who might have information that can help in apprehending the suspects or in the investigation to please contact the nearest police station or crime stop on 086-001-0111," Masondo said.