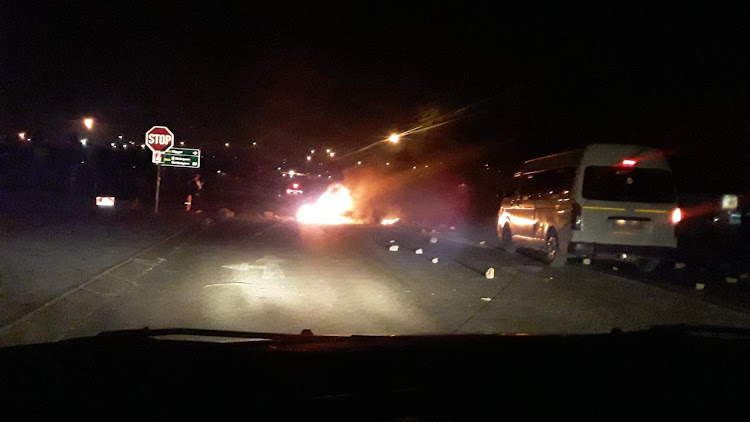 Several roads have been blocked in Tshwane on Thursday morning.
Image: Bethmtshali on Twitter

Several protests have been reported across the country on Thursday morning.

Protesters brought Tshwane to a standstill, with protest action reported across various areas in the capital city.

Areas affected included Hammanskraal, Soshanguve, Mabopane, Temba and Lotus Gardens to the N4 Magalies highway. The N1 North has also been closed between the Hammanskraal exit and Carousel plaza.

The protests come ahead of the delivery of the 2019 state of the capital address by mayor Stevens Mokgalapa.

A "Save Tshwane #TotalShutdown" poster has been doing the rounds on social media.

Reasons cited for the shutdown include a lack of service delivery, "unfair municipal billing and "arbitrary" taxi fines and impounding of vehicles.

I woke up hoping to see some smoke of burning tires and whistles but dololo... 😢 This #TshwaneShutdown thing is selective nxa 👇👇it must be called off pic.twitter.com/O0wMA1TQh7

In Cape Town, meanwhile, the city's traffic spokesperson Maxine Bezuidenhout said protesters have barricaded roads in and around Khayelitsha with burning tyres and rocks. She said the N2 highway between Somerset West and Cape Town has been closed.

It is alleged that "land grabbers" have taken to the streets.

"The whole area is affected. Most access routes to and from Khayelitsha are closed or obstructed. There is no access to and from the area," said Bezuidenhout, adding that Baden Powell Drive was closed in both directions between Swartklip Road and Oscar Mpetha Road due to violent protest.

In Johannesburg, metro police spokesperson Wayne Minnaar said protesters took to the streets of Orange Grove, where about 50 people protested on the corner of Louis Botha Avenue and 9th Street.

This protest was dispersed, but protesters have since moved to the corner of 6th Avenue and 12th Street.

Orange Grove Protest update 1:
A crowd of +- 50 were protesting on cnr Louis Botha/9th St, they have since been disbursed & are now at cnr 6th/ 12th St. #JMPD on scene maintaining peace & order.@HermanMashaba@JoburgMPD @CoJPublicSafety @CityofJoburgZA @AsktheChiefJMPD pic.twitter.com/kqzaFTMDzE

A timeline of the Alex protests
News
2 years ago

Residents have become the victims in a bitter war. Their crime? Wanting a better life.
Politics
2 years ago