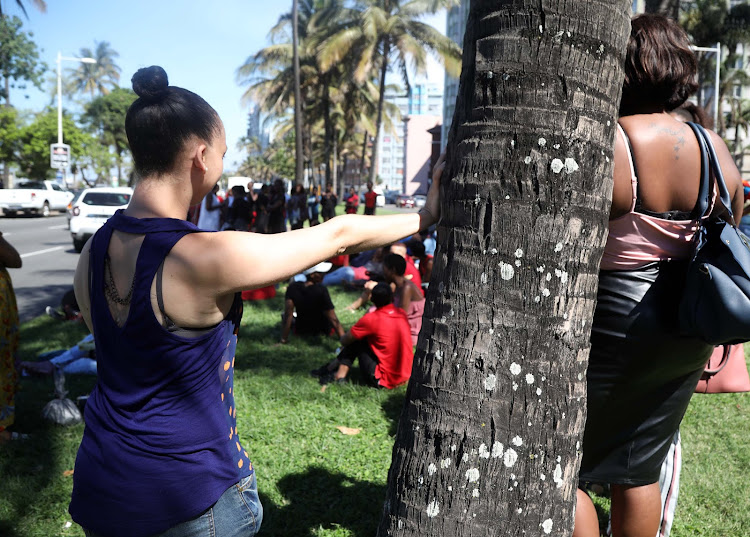 Durban prostitute 'Pinky' outside the Durban High Court on Thursday. She and other sex workers want the users, pimps and brothel owners to be penalised, not the sex workers.
Image: Jackie Clausen

That’s the daily routine for Durban prostitute Pinky, whose weathered face belies her 29 years and frequent turns to the bottle to ease the pain of her difficult life.

Originally from the low-income suburb of Wentworth, south of Durban, Pinky struggled to find the words to express herself and was hardly able to contain her emotions when she began detailing the circumstances surrounding her life in prostitution.

She told TimesLIVE that she began life as a prostitute at 18 and could not recall the number of men she had slept with, only that it was well into the hundreds.

She revealed that on an average day she would sleep with at least three to five clients.

"It was hard at home, we were a poor family, so I tried to go out there and make the money, it's the struggle."

Some of my clients request not to use a condom but I tell them that it’s for their own safety and they have to use it.

Pinky said her two brothers and parents, who are pensioners, were unaware of her double life, and that an incident in her upbringing pushed her in the direction of prostitution.

"I was drugged and raped by a group of guys when I was 15. No one in my family knows, and they don't know what I do for a living. I keep it a secret."

When she tested HIV positive in March 2017 it was harrowing, but she continued working.

"It was heartbreaking, but what can you do? I just take my treatment. Some of my clients request not to use a condom but I tell them that it's for their own safety and they have to use it."

She was speaking following the appearance of a 30-year-old businessman who is accused of the brutal murder of Durban escort Siam Lee in January 2018.

Showing support for slain Lee, Pinky gathered outside the Durban High Court with about 50 members of the survivor-led movement, Kwanele, who have called on President Cyril Ramaphosa to provide clarity around the possible decriminalisation of sex work in the country.

The man accused of kidnapping and murdering 20-year-old escort Siam Lee is due to make a brief appearance in the Durban High Court on Thursday.
News
2 years ago

In their letter, they said: "Dear Mr President, as women with first-hand experience of being prostituted in South Africa, we, the movement of the survivors of the system of prostitution – predominantly poor black women from disadvantaged backgrounds – wish to express our shock, concern and disappointment at your recent support of the full decriminalisation of the sex trade at the opening of the newly built court in Johannesburg."

"You state in your address that all relevant stakeholders will be – or have already been – consulted in this process.  However, we do not feel that our viewpoint has been clearly heard," they continue.

"Our leader and founder wrote an open letter to you last year stating our concern regarding the adoption of a resolution by the African National Congress to work towards decriminalising the exploitation of vulnerable women and girls – referred to by you as 'sex work'.

"Then, on August 23 2018, 200 of us, representing hundreds of other women from seven provinces, delivered a memorandum requesting that you look into this matter and that you meet with us so that we can further elaborate on our arguments. However, we have yet to receive a response," they stated.

In closing, the letter draws attention to the South African Law Reform Commission (SALRC) report issued in 2017, which recommends that SA does not enact a law that fully decriminalises the sex trade. One of its two key policy recommendations was that SA follows the "Nordic" or "Equality Model", which has been successful in ending the exploitative systems of prostitution.

Kwanele founder Mickey Meji said she could empathise with Pinky because she had once been a prostitute herself. 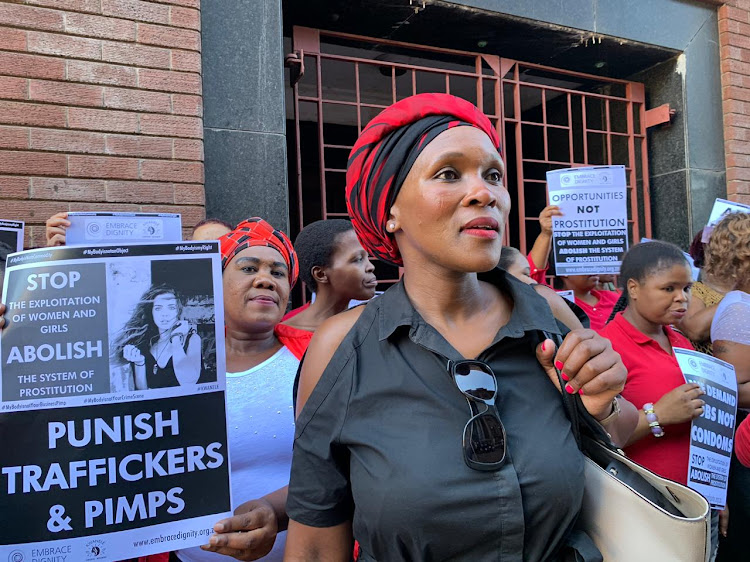 Mickey Meji, the founder of Kwanele, a survivor-led prostitution movement, outside the Durban High Court on Thursday.
Image: Jackie Clausen

"The Nordic or Equality Model has been successful in ending the exploitative system of prostitution. It has gained momentum since it was first pioneered in Sweden in 1999, followed by Norway, Iceland, Canada, Northern Ireland, France, the Republic of Ireland and Israel. Founded on the principle of gender equality, it recognises and reflects the inherent inequalities within prostitution and aims to protect the rights of prostituted individuals," said Meji.

Kwanele is fighting for prostitution to be decriminalised but for the "users or buyers" to be penalised.

"We find that prostitutes are the only ones who get arrested. I myself have spent countless nights in police cells for walking the streets as a prostitute yet I have never seen any man who solicited sex from a woman arrested.

"We want the users, pimps and brothel owners to be penalised. The only way to resolve the problem is to kill the demand. Once the demand is gone, the supply will also follow," she said.

Presidential spokesperson Khusela Diko hadn't responded to queries at the time of publishing.

The case against the 30-year-old businessman accused of the brutal murder of Durban escort Siam Lee has been postponed.
News
2 years ago

Cape Town survivor of abuse in the sex trade Mickey Meji is letting the world know she will not stand by as prostitution is decriminalised.
News
2 years ago

Fact that almost all sex buyers are men shows how deeply entrenched prostitution is within patriachy, the writer says.
Opinion & Analysis
2 years ago
Next Article