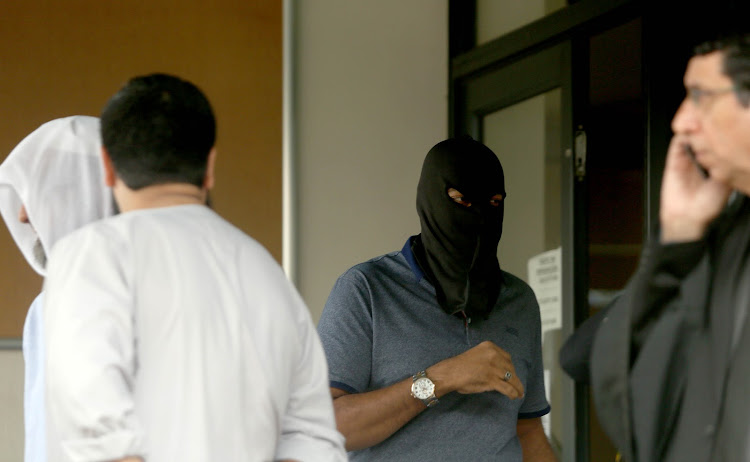 Frahad Hoomer, the alleged mastermind in the Islamic State loyalists case, donned a black balaclava to hide his face inside the Verulam Magistrate's court on Monday.
Image: Thuli Dlamini

The specialist state prosecutor in the case against the 12 men accused of terrorist activities in Durban has been withdrawn.

Senior specialist prosecutor advocate Adele Barnard told the Verulam Magistrate's Court on Monday that she had been informed of her removal from the case just minutes before the matter came before the court.

"The NDPP (National Director of Public Prosecutions) would like the matter to be handled locally," she said.

The men also face various other charges‚ including murder‚ attempted murder‚ arson and extortion. They were arrested in a co-ordinated Hawks raid on October 5. The men stand accused of being aligned to terror group Islamic State, with Hoomer allegedly orchestrating the fatal Verulam mosque attack in May last year, as well as a series of firebomb attacks at retail outlets in the months that followed.

National Prosecuting Authority (NPA) KwaZulu-Natal spokesperson Natasha Ramkisson-Kara told media outside the court the decision to recall Barnard was not a sign that the state's case was fizzling out.

"This decision (is part of) returning provincial matters to provincial prosecutors, and is in no way a sign that the state's case is fizzling out. The state is still very confident about this case," said Ramkisson-Kara.

Meanwhile in court, advocate Jimmy Howse, who represents most of the accused, said that he was not pleased by yet another delay. The state informed them that the police voice specialist who the state had called, was not present in court.

The matter will be back in court on May 6.

Additional terrorism-related charges have been added to the case against the 12 men accused of orchestrating the bloody Verulam mosque attack and a ...
News
2 years ago

Isis loyalists to hear verdict on bid for bail

Twelve alleged Isis loyalists with alleged ties to the fatal Shia Verulam mosque attack and a wave of bombings across Durban will on Tuesday know if ...
News
2 years ago