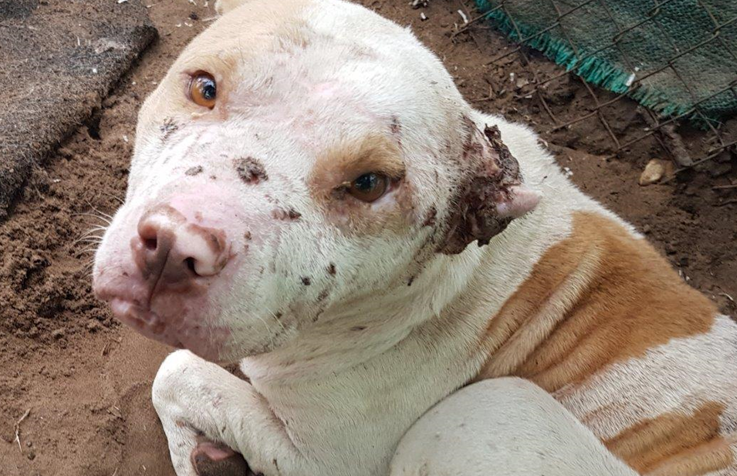 One of the dogs rescued by the NSPCA in Modimolle.
Image: Supplied / NSPCA

A partially blind, hearing-impaired pitbull was among 22 dogs found chained and caged in a filthy enclosure in Modimolle, Limpopo, the National Council of the SPCA said on Monday.

The animal rescue unit said it had received a tip-off about suspected dog fighting being carried out on the property and had investigated.

"Spiderman, the pitbull, stared up nervously at his rescuers from where he was curled up in the mud. The injuries and infections deep into his ears made it difficult for him to hear and his injured eye impaired his vision, but the little dog was ever hopeful that these people with the gentle hands would look past the mass of scars that covered his body and into his open and forgiving heart," said the manager of NSPCA’s special investigations unit, Wendy Wilson.

"Inspector Ayanda Ngcofe's low whistle brought a cautious tail wag from Lady, the chained up pitbull cross, her questioning whine brought her sister Sassy out of the darkness. The two frightened, starved and tick-infested mother dogs brought tears to trainee inspector Ngcofe’s eyes. She quickly cut the chains around their necks and both Lady and Sassy trustingly let her gather up their surviving pups and then followed her to safety." 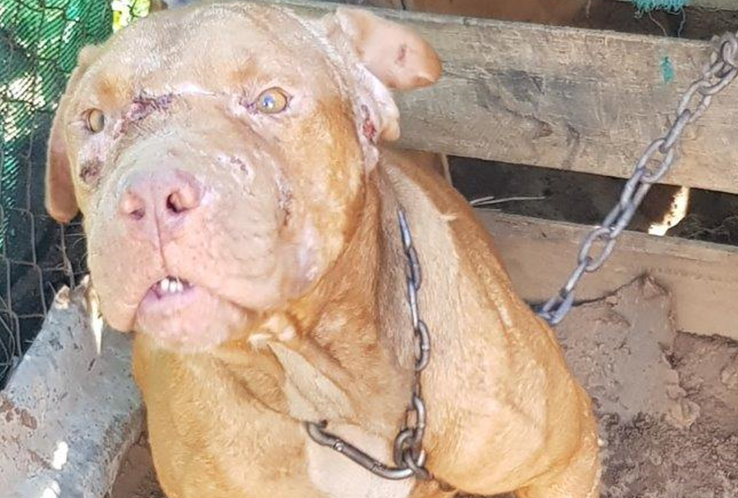 One of the dogs rescued by the NSPCA which was found chained on a Modimolle property.
Image: Supplied / NSPCA

Wilson said the horrific injuries on the dogs painted a picture of the terrible conditions that the dogs lived under.

Besides dog fighting, she said, the dogs were believed to have also been pitted against wild pigs.

Two pigs were also rescued from the property as well as three illegally captured tortoises.

"This case is yet another clear illustration that the abuse of one animal not only indicates the likely abuse of other vulnerable but also indicates the existence of additional criminal activity," Wilson said.

She stressed that the national animal protection legislation stated that "any person who baits or provokes any animal or incites any animal to attack another animal shall be guilty of an offence and liable on conviction to fines and/or to imprisonment."

A person arrested on the property is due to appear in the Modimolle Magistrate’s Court on Wednesday.

The National Council of the SPCA on Friday revealed the terrible conditions it found a number of wild animals in at a captivity facility in the North ...
News
3 years ago

The National Council of Society for the Prevention of Cruelty to Animals (NSPCA) will open a criminal case against the owner of a property in ...
News
3 years ago

A cheetah that survived being hunted by two men on horseback with dogs is undergoing treatment and rehabilitation by a wildlife veterinarian.
News
3 years ago