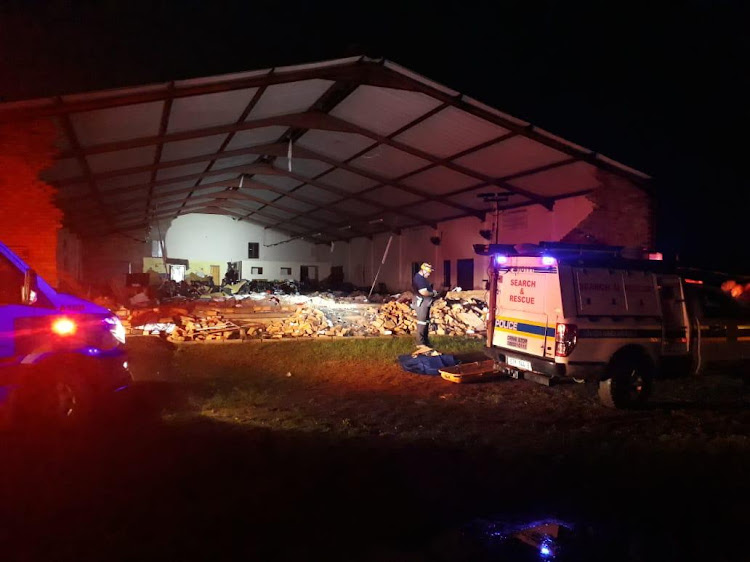 The wall of a Pentecostal church in northern KZN collapsed on Thursday as heavy rains lashed the province. Thirteen people were killed.
Image: Supplied

Condolences have started to pour in for the families of the 13 people killed when a wall at a church in northern KwaZulu-Natal collapsed during a service on Thursday night.

Emergency services said the Pentecostal church, in the Dlangubo area of the uMhlathuze municipality, collapsed as heavy storms lashed parts of the province. Six people were also seriously injured and 10 suffered minor injuries.

Thirteen people died and 16 were injured when a church roof collapsed in northern KwaZulu-Natal as heavy storms lashed the province on Thursday night.
News
3 years ago

The ANC and the DA both sent condolences following the tragedy.

“The African National Congress in KwaZulu-Natal sends its deepest condolences to the relatives of the 13 people who sadly lost their lives when the side wall of the Pentecostal church building... collapsed following heavy rainfall.

“We join hands alongside the bereaved families who have lost their loved ones at this poignant time of the Passover due to such a sudden and unexpected disaster. We join hands with them, acutely aware of the excruciating pain that they must be going through," the party said in a statement.

“We are sad to learn that 13 congregants who were gathered for a Passover session on Thursday night lost their lives. We are further urging those who will be travelling to further away places for Good Friday service to be vigilant on the roads, ensuring a safe return to their respective homes,” he said.

Focus on drinking and driving as Easter safety campaign is launched