Rob Packham killed his wife 'to get out of a tight spot', says prosecutor 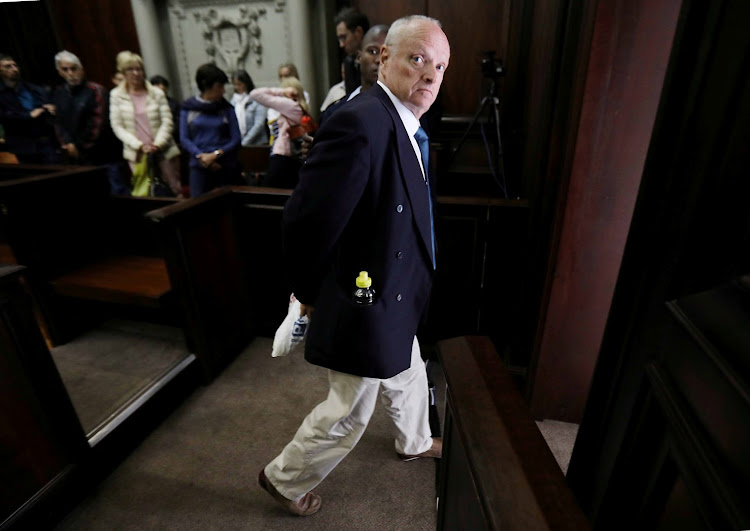 Rob Packham found himself in a "tight spot" between two women and attempted to extricate himself by killing his wife, the Cape Town High Court was told on Wednesday.

Presenting her closing arguments in the Constantia businessman's murder trial, prosecutor Susan Galloway quoted a phrase allegedly used by Packham in a conversation with his mistress: "I love my life, but not my wife."

Galloway focused on evidence of Packham's demeanour and movements on February 22 2018, when his wife Gill died, and the following days.

"The conduct of the accused … was not consistent with that of a reasonable person placed in the same situation," she said.

His behaviour included asking a colleague to provide him with an alibi for the morning of the murder. Packham claims the alibi was intended to help him surprise Gill with a new car for her coming birthday.

"Packham's work phone was in forwarding mode at several points in the day, making him unreachable. He later gave the police an incorrect PIN code for the same phone," said Galloway.

The 57-year-old also failed to properly report his wife missing, and missed a meeting he set up with police because he went for a "scenic drive".

Galloway told the court Packham changed the tyres on his Audi so they would not match the tracks found at Diep River railway station, where his wife's body was found in the boot of her burnt-out car. Packham has denied doing so.

"Whenever there is no plausible answer, he blames someone else," Galloway said, referring to the hijacking or kidnapping scenarios Packham suggested earlier in the trial. "There is no evidence in or around the house to support this."

A witness identified Packham as the driver of his wife's car the afternoon she died. He was identified by two other witnesses as fleeing Diep River railway station later that night.

In attempting to defeat the ends of justice, Galloway said, Packham disposed of the murder weapon, moved his wife's body from the crime scene to the boot of her car and set the car alight.

Galloway linked the "totality of the evidence" to Packham's guilt. The defence will present its closing arguments on Thursday.

‘I love my life, but I don’t love my wife’: state paints ‘wife-killer’ Packham as dishonest

Wife-murder accused Rob Packham told the High Court in Cape Town on Monday how upset his wife Gill was when he admitted in a counselling session he ...
News
2 years ago