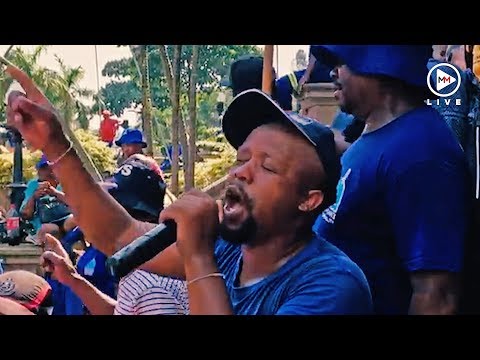 Workers protesting over salary grades gathered at the Durban City Hall early on Thursday morning, blockading roads and causing a traffic gridlock in the city centre.

The workers - whose protest action brought the city to a standstill on Tuesday -  went on the rampage in the vicinity of City Hall, leaving rubbish and waste strewn across streets on Thursday afternoon.

"People have been running around acting crazy and toppling bins. The largest groups are still hanging around outside City Hall. For now we've got things under control."

Sewpersad said a number of streets had been cordoned off and traffic diverted to lessen the disruption.

He said metro police and the SAPS had their work cut out for them as the city played host to Africa's biggest travel event, the Tourism Indaba, which is attended by local and international travel stakeholders, as well as a provincial prayer and memorial service to honour the victims of recent disasters.

The protest comes in the wake of the alleged promotion of more that 50 uMkhonto we Sizwe military veterans from a grade 4 to grade 10 pay scale.

In a statement, eThekwini municipality noted that it would be taking the grievances of workers who want to be elevated to grade 10 to the central bargaining council to deliberate on the matter and make a ruling.

The municipality noted that it did not have jurisdiction to handle the matter and that, legally, the bargaining council would need to address the issue.

City manager Sipho Nzuza appealed to workers to resume their duties with immediate effect and to refrain from resorting to violence.

"After lengthy consultations between us and the union representatives, we have decided to refer the matter to the central bargaining council for further negotiations and determination. Discussions at bargaining council will commence on Monday and are expected to be concluded in 30 days.

"We urge our employees to desist from violent strikes that cripple the operations of the city. Recently we had to spend a lot resources and money to clean up the mess that was left behind by our workers in the central business district," said Nzuza.

The city said that the principle of no work, no pay would apply and workers could face disciplinary action as the city had obtained an interdict making it unlawful to participate in the strike.