One dead, two injured and more than 30 arrested in violent Durban protest 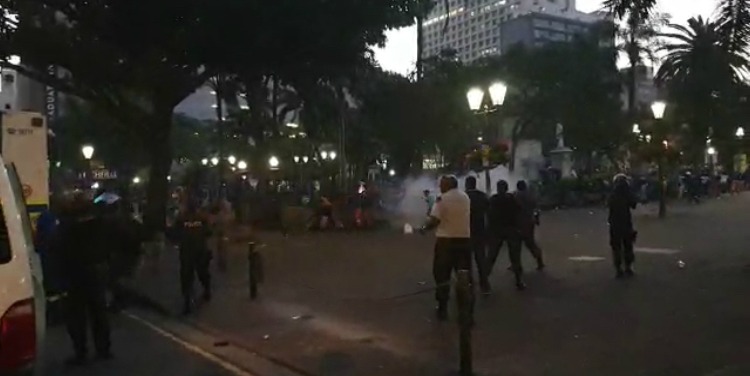 One person died and dozens were  arrested after police opened fire on protesting eThekwini municipal workers in Durban on Thursday.

Metro spokesperson senior superintendent Parboo Sewpersad confirmed to TimesLIVE on Friday that at least 31 people were arrested and charged with attempted murder and malicious damage to property.

This after scores of workers resorted to breaking concrete bins and trashing shop windows as they plunged the Durban CBD into chaos.

The workers started protesting on Tuesday following disputes over salary increases granted to 55 uMkhonto weSizwe veterans employed in the water and sanitation department.

In a video which has gone viral, police can be seen firing nonlethal rounds into crowds of protesting municipal workers.

Parboo said two people were injured during the clash with police. One was hit by a rubber bullet, while the other fell and hit his head.

He said reports that a worker had died as a result of the shooting could not be confirmed. However, SA Municipal Workers' Union (Samwu) spokesperson Papikie Mohale said a person died on Thursday when police fired on the protesters.

"It was a municipal worker who had been wearing a blue eThekwini uniform," Mohale said.

Mohale said the union had information that more than one worker may have died and the union was working to confirm if this was true.

Ethekwini mayor Zandile Gumede has denounced the illegal damage to property and basic infrastructure during the strike, which has "seriously derailed our plans for dealing with the after-effects of the devastating floods".

In a statement on Thursday, Gumede noted that last week issues of water being cut off to certain communities was raised with the provincial executive.

"The premier appointed the most competent team to deal with the matter. The city manager is working with this team and has made all the relevant information available for scrutiny.

Thousands of protesting municipal workers have gathered outside the Durban City Hall on May 2 2019 over an ongoing dispute about what they say are unfair promotions.

"I want to dispel the notion that the municipality favours military veterans and does not care about other municipal workers, especially those who are members of Samwu. This is a blue lie and we believe that such a narrative is aimed at sowing division and weakening the municipality."

She said employees, councillors and volunteers had been on the ground cleaning the city and trying to bring stability.

"No amount of sabotage will deter our hardworking spirit, we will continue with the mandate that we got from the electorate. We will ensure that this city is clean and we will not tolerate any further sabotage and lawlessness," she added.

Meanwhile, the ANC in KZN has called an urgent press briefing on Friday regarding the ongoing unrest within eThekwini municipality.

The situation is tense outside the Durban City Hall, where thousands of protesting municipal workers have gathered over an ongoing dispute about ...
News
3 years ago

The eThekwini Municipality is in the process of applying for a court interdict to force striking water and sanitation workers to go back to work.
News
3 years ago

The devastating floods which claimed 71 lives in KwaZulu-Natal have officially been declared a provincial disaster.
News
3 years ago