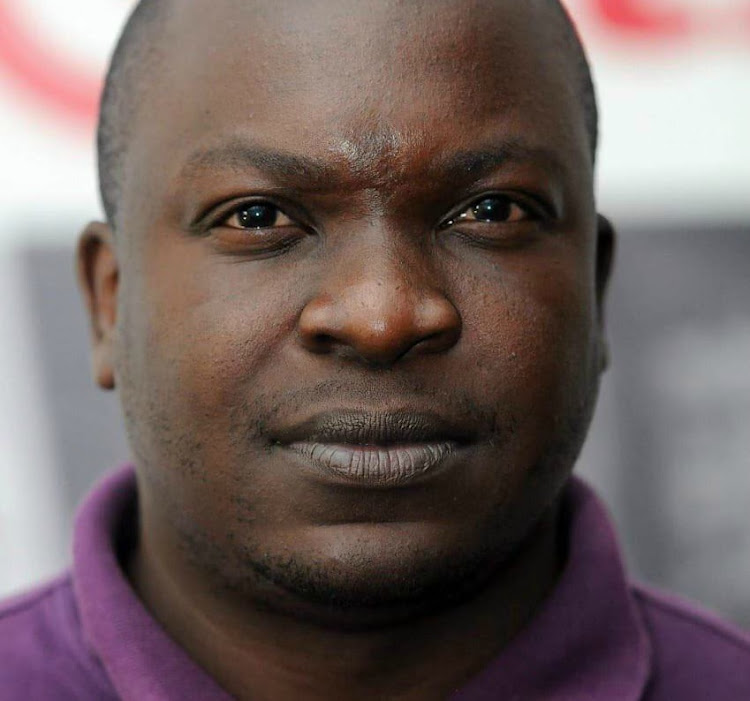 Ngwako Modjadji died on Saturday evening what was believed to be a hit-and-run.
Image: Mbuyiseni Ndlozi on Twitter

A City Press senior political reporter,  Ngwako Modjadji, has died in what is believed to have been a hit-and-run accident, the SA National Editors' Forum (Sanef) confirmed on Sunday.

He died in the early hours of Sunday morning.

The 40-year-old had a national diploma in journalism from the Tshwane University of Technology. He had worked at the Citizen and Sowetan newspapers, as well as Drum magazine, before joining City Press in 2018.

According to his uncle, Sonti Modjadji, Ngwako was at e'Social Link in Soweto and was crossing Impala Road to catch an Uber.

"It was indeed a hit-and-run. But the number plate stayed behind at the scene. Ngwako died at the scene," Sonti said.

The incident happened at around 1.30am on Sunday.

WATCH: Observing a moment of silence for the late Ngwako Modjadji, a City Press journalist who sadly lost his life this morning while on duty. May his soul rest in eternal peace. #ANCSiyanqoba #SiyanqobaRally #VoteANC #GrowSouthAfrica pic.twitter.com/to10VnOAyj

"He cut his teeth in journalism at the Citizen newspaper before joining the Sowetan as a political journalist. He was currently part of the core team reporting on politics at the City Press," Sanef said in a statement.

Modjadji's colleagues praised him for his "sterling work ethic", which saw him dominate the front pages of the publication.

"He had incredible energy and enthusiasm and his understanding of political dynamics gave him an ability to spot a story from afar. And once he got the scent of a story he chased it until he got it," Makhanya said.

He said that the country's journalism industry had lost one of its "shining lights".

Sanef secretary-general Moipone Malefane, who had also worked with Modjadji at Sowetan, has described him as a gentle soul, hard worker and a very respectful man.

"He played an important role in helping interpret the political life of SA," Malefane said. "We send our deepest condolences to his family and colleagues in the media especially at the City Press where he was an integral part of their elections coverage."

Saddened to hear about the passing of @City_Press journalist Ngwako Modjadji. Condolences to the @City_Press and the entire media community. May his soul rest in perfect and eternal peace. 🙏🏾😔🙏🏾 pic.twitter.com/iVUMwaNtqe

Condolences to the media family especially at @City_Press Ngwako Modjadji was an amazing soul. He was a hard worker, he loved journalism and helped interpret the political happenings of our country, dominating front pages everywhere he worked!

Absolutely gutted to hear the news that @City_Press journalist Ngwako Modjadji has passed away. He was a kind, soft spoken man who I had so much respect for. My he rest in peace 💔 🙏

To my brother who would always call me "mchana' and I take no offence, arguably leading political journalist in the county, RIP Ngwako Modjadji. Just on Thursday, we spoke about a hangout at our usual spot in 86 republic but with this alleged hit and run, its history. 🙏😢🗒️ pic.twitter.com/COAjCGpxg0

RIP Ngwako Modjadji. Sad day for SA Media. I will always remember when you said Ausi Sophie I really like what I am doing. Thank you Moipone Malefane for introducing me to Ngwako Modjadji.😥😥😥😥😥.

Five people were injured on Wednesday in a nine-vehicle collision on the R59 south-bound highway in Sasolburg.
News
2 years ago

One person died and two others were left in a critical condition after crashing into a cow in Midvaal, Johannesburg, paramedics said on Wednesday.
News
2 years ago

A motorist in Edenvale had a scary but lucky experience on the highway when a runaway tyre from a truck wrote off his car.
News
2 years ago