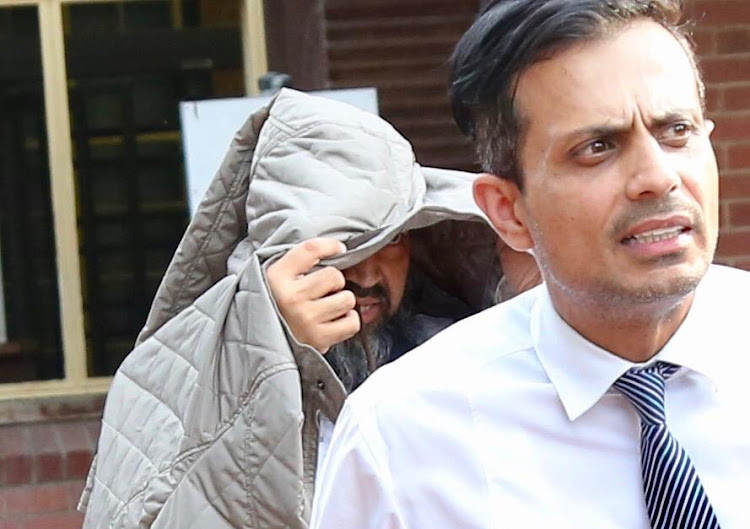 Farhad Hoomer, accused number one in the bombings case, covers his face as he leaves the Verulam Magistrate's Court with his attorney.
Image: Jackie Clausen

Recently elected national director of public prosecutions (NDPP) Shamila Batohi is being called on to address concerns raised by the defence teams representing the 12 men accused of terrorist activities in Durban.

The men also face various other charges‚ including murder‚ attempted murder‚ arson and extortion. They were arrested in a co-ordinated Hawks raid on October 5. The men stand accused of being aligned to terror group Islamic State, with Hoomer allegedly orchestrating a Verulam mosque attack in May last year, as well as a series of firebomb attacks at retail outlets in the months that followed.

Prosecutor Torie Pretorius informed magistrate Rajesh Parshotam that he had been handed a letter, addressed to the NDPP,  by the defence which highlighted some of their concerns about the case.

TimesLIVE previously reported that the legal representatives of the accused were unhappy about the number of delays and incomplete investigations.

Deliberating on this point, Jimmy Howse, who represents most of the accused, informed the court that the accused had been arrested months ago and investigations were still incomplete.

"I previously placed on record that we believe arrests were made prematurely and the investigations then followed. The accused in this matter were arrested on October 5 2018 - more than 6 months ago. This matter has been under investigation for a considerable amount of time."

Howse said the state had not yet appointed a local prosecutor to replace specialist prosecutor Adele Barnard, who had been withdrawn from the case under the directive to  "return provincial matters to provincial prosecutors".

"We want assurance that investigations will be completed promptly. We are at a stage where a lot of electronic devices, including devices belonging to family members, or non-accused in this matter, have been confiscated and not returned," Howse said.

Attorneys Ahmed Amod and Fathima Lockhat echoed Howse's sentiments of discontent in the manner in which the state had handled the case thus far.

The matter was postponed to July 22 for further investigation.

Meanwhile Hoomer will appear separately on June 10 for voice experts to provide feedback on voice recognition analysis from his electronic devices which had been seized by the state.

Additional terrorism-related charges have been added to the case against the 12 men accused of orchestrating the bloody Verulam mosque attack and a ...
News
2 years ago