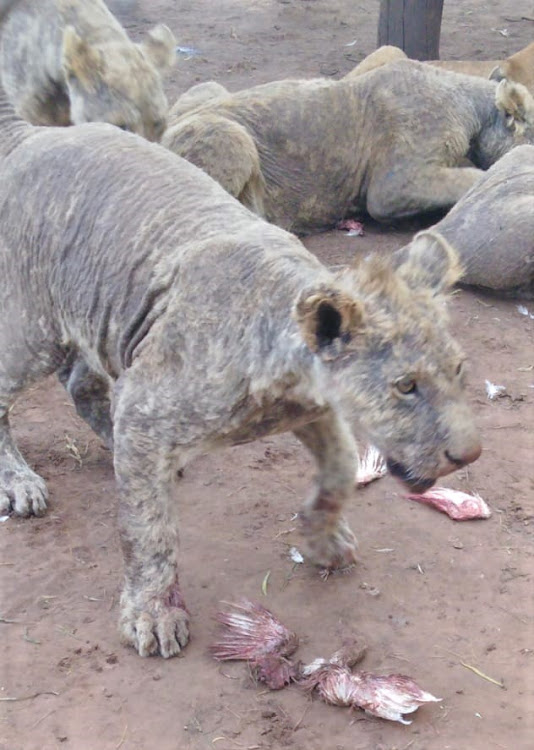 Lions and big cats suffering from severe mange and other disease were discovered by the NSPCA at a North West breeding farm last month.
Image: Conservation Action Trust

The National Council for SPCAs (NSPCA) has laid criminal charges against a lion breeder in the North West for contravening the Animal Protection Act after 108 big cats were found riddled with mange and other ailments that rendered some of them unable to walk.

The NSPCA visited the farm near Lichtenburg on April 11.

Douglas Wolhuter, manager at the NSPCA Wildlife Protection Unit, said the organisation was alerted to the condition of the cats by a member of the public.

Wolhuter would not comment on the condition of the animals as he said it may affect the case, but a widely circulated article by environmental manager Dr Louise de Waal in NPO Conservation Action Trust said inspectors found 27 lions with severe mange.

She said caracal were suffering from obesity and were unable to even groom themselves and two lion cubs were in such a severe state that they were unable to walk.

Wolhuter said the two cubs had been surrendered by the farm owner and were recovering at an undisclosed location. He said the owner was also charged in connection with the deplorable conditions the animals were kept in.

The National Council of the SPCA on Friday revealed the terrible conditions it found a number of wild animals in at a captivity facility in the North ...
News
2 years ago

De Waal said the enclosures were dirty, overcrowded and infested with parasites and that there was a lack of water for the animals.

Wolhuter said they were told by staff at the farm that the cats were being bred for the export market. "We don't believe they are being used to populate other farms, it is more likely they are being sold for hunting and bone trade," he said.

The farmer is a member of the South African Predator Association, an organisation which polices the sustainable breeding of predators in SA.

Association CEO Deon Swart said the organisation stood for standards concerning the breeding of lions and that the farmer was a member in contravention of those standards. Due process would follow, he said.

Swart said the organisation had 60 members and its members did not represent all the captive lion breeders in SA, only the ones who upheld the agreed standards of practice.

The SAPS North West provincial office confirmed a case was opened and the matter is being investigated.

South Africa has been implicated in the supply of donkeys for Chinese medicine‚ a report released on World Donkey Day has revealed.
News
3 years ago

Lions were kings, now they are commodities

Lion farming may be a buffer against lion poaching, but the business has to be cleaned up, writes Paul Ash
Opinion & Analysis
4 years ago