It’s illegal, but the mashonisas keep documents and bank cards 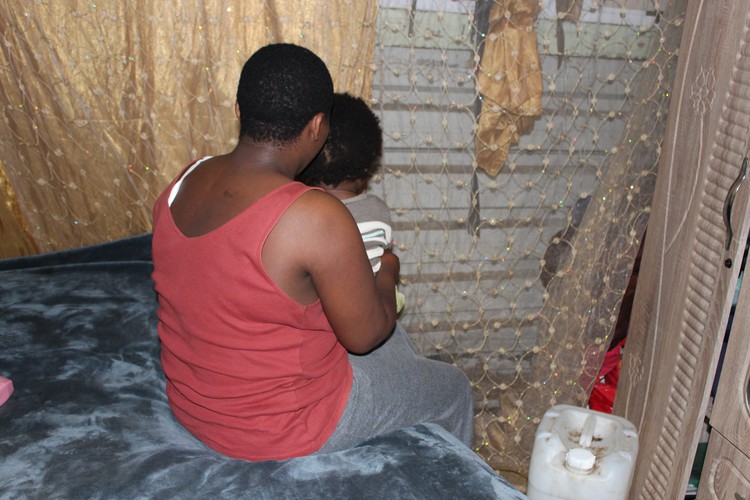 Nomfundiso* will not vote on 8 May because a mashonisa has her ID.
Image: Nombulelo Damba-Hendrik / GroundUp

Thirty-three-year-old East London resident Nomfundiso* will not be voting on Wednesday. Not because she doesn’t want to, but because a loan shark has her ID.

But many do just that.

Sindi* is a well-known mashonisa in Newlands village in East London. She also owns a shebeen. She told GroundUp that she has six IDs belonging to her clients. This can only mean that the clients are not going to vote tomorrow. Sindi said it was the mashonisas’ rule to keep the IDs and clients had no problem with that.

A 54-year-old loan shark from Welkom in the Free State will have to cough up R18,000 after he was convicted for contravening the National Credit Act.
News
2 years ago

We visited Sindi, who refused to give her real name, after an interview with Nomfundiso. Nomfundiso told us that Sindi had refusing to return her ID to allow her to vote. The mother of three owes Sindi R2,000, which she borrowed to help her brother train as a security guard.

The plan was for Nomfundiso’s husband, who is also a security guard, to help her brother get a job. But the process was long and with interest at 50% a month, within a month she owed R3,000.

Nomfundiso said the mashonisa had first refused to give her money because she was not working and lived off R1,200 in child support grants.

They agreed that the mashonisa would take R1,000 in interest from her Sassa card and Nomfundiso would pay the balance in cash.

“We all know that if you want money from the mashonisa, you must leave your ID, Sassa or bank card, including the PIN. Your card will be put inside your ID with a small paper on which is written your PIN,” said Nomfundiso.

She said she had repaid R1,000 in cash and her brother had started working but would only be paid at the end of the month, so she still owed money. “That is why the mashonisa still has my ID.”

Nomfundiso said she had asked Sindi to return her ID so she could vote tomorrow, but Sindi refused.

“A mashonisa is a quick option when you need money urgently and they give you your money as cash. As long you give them what they want, they do not have a problem giving you money.

”But to be honest, it saddens me to know that I’m not going to vote tomorrow.”

Nomfundiso also blames the government for not creating jobs for young people. “Our government is not doing anything for us. We are sinking in debt from the mashonisas because we do not have proper jobs.”

When we called Sindi, she refused to speak on the phone and insisted we meet in house, just a few metres from the shebeen. According to her, there are about five mashonisas in the area - all of whom take IDs and cards from their clients.

Sindi said she arrived in East London five years ago from Cape Town. She had first lent money to a neighbour who had spent all his money in a shebeen and had no money for transport to work on a Monday. “I took the opportunity, I gave him R300 and I told him the interest was 30% a week,” she said.

Sindi said within two months she had nearly R10,000 and her customers were increasing. She decided to increase the interest to 40% a week. She said for the past five years her interest had been 50% a month.

Asked why she was taking IDs and bank cards, she said it was for security. “When someone wants money from you, they beg and make all sort of promises - but when it is payback time, they run away. I got tired of running after people or begging for my money. I told them if you want money, then bring your ID and Sassa or bank card. Then you write down your PIN and tell me when you get paid,” she said.

On the day of payment, she goes to the bank with the client. If the client returns all the money, she returns the ID. But if not, she keeps it. “This is to make sure that they do not go to Sassa to apply for another card. If they do, I will know because I’m the one getting the grants,” she said.

We asked Sindi if she planned to give people their IDs to vote tomorrow. She laughed and asked, what if they do not return the IDs? “I only have six IDs with me and most of my clients will start borrowing money this weekend,” she said.

“Our clients understand the procedures for borrowing the money. If they take our money, we keep their IDs until they pay. Election time or no election time. And we are not forcing anyone.”

İEC spokesperson Trevor Davids said no one could vote without an ID.

*Not their real names.

It's all systems go for elections, says IEC

The Electoral Commission (IEC) says it is all systems go for the sixth democratic national and provincial elections on Wednesday.
Politics
2 years ago

A starter pack for first-time voters at the 2019 elections

Sassa says its "extremely" worried after a video of alleged criminals boasting with stolen Sassa cards and money went viral.
News
2 years ago