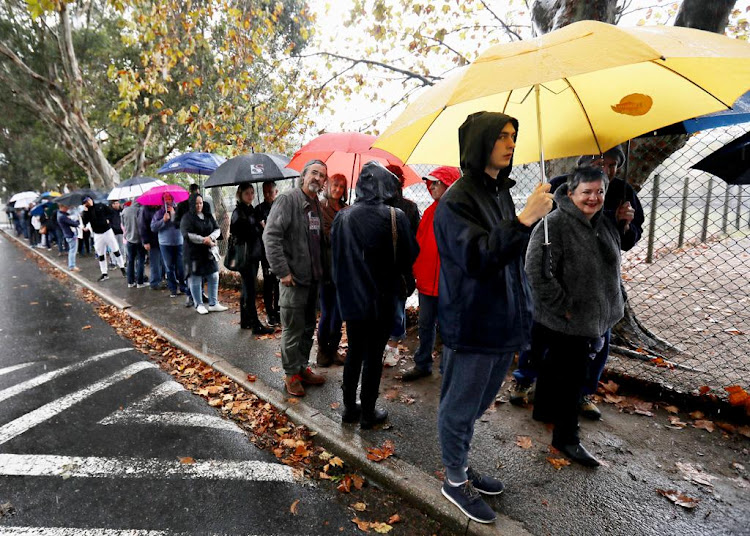 A lengthy queue formed in the rain outside the polling station at Claremont Primary School in Cape Town.
Image: Esa Alexander

Bad weather, community unrest, power cuts and logistical issues tainted the 2019 national elections - but despite this the elections were a success, the electoral commission (IEC) said on Wednesday as the polls closed.

In a statement, the IEC maintained as earlier comment that these elections were “smooth”.

In the Free State, however, 16 makeshift voting stations were blown down by strong winds and heavy rains, while in Nelson Mandela Bay and Cradock in the Eastern Cape heavy rain and winds also affected operations at more than 30 temporary voting stations.

“In a number of areas voting after dark was affected by power outages, including in KwaZulu-Natal (specifically Umlazi), Limpopo (Vuwani and Giyani) and Gauteng (parts of Johannesburg). The nature of the power outages was not immediately apparent but included instances of cable theft, weather related outages and other unscheduled interruptions,” the commission said.

Stay in the know: All the news, opinion and analysis around the 2019 general elections
Politics
3 years ago

It said power had quickly been restored to the affected areas and some of these problems were anticipated and prepared for.

“Voting stations have also been equipped with some emergency LED lighting and lighting provided by the Cogta as back-up,” the Electoral Commission said.

Meanwhile, vote counting was underway at the voting stations under the watch of party agents and observers.

WATCH LIVE | Elections 2019: Building up to the numbers

We take a look at recent polls, what they tell us about predictions and just how reliable these numbers are.
Politics
3 years ago

All across South Africa, voters have braved the chilly weather to cast their ballots.
Politics
3 years ago