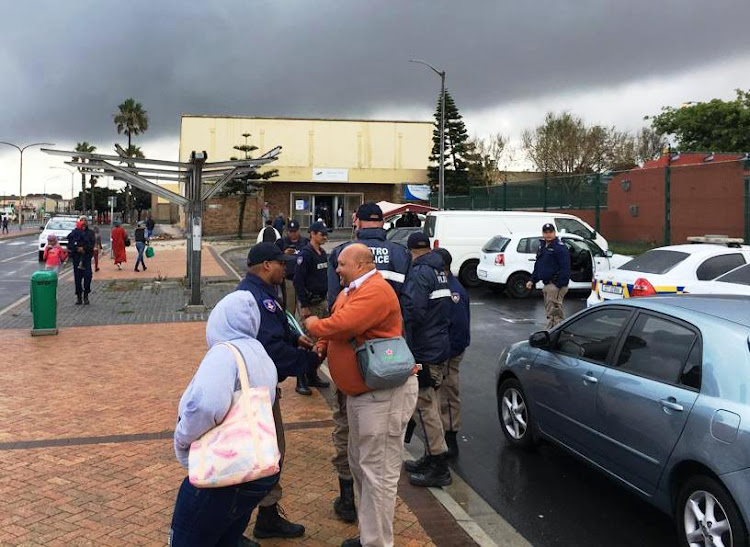 A contingent of metro police were on duty outside the Hanover Park Civic Centre polling station in Cape Town on May 8 2019.
Image: Aron Hyman

Steven Swartz voted for Cyril Ramaphosa in Hanover Park, a decision he believes will be good for SA, but he says political parties won’t fix his troubled Cape Town community.

“The ANC can never get gangsterism out of Hanover Park. The people can," he said.

Standing outside Hanover Park Civic Centre on Wednesday, Swartz waited for his wife to finish voting. She took a long time. Perhaps, like many South Africans, she was undecided until she arrived at the voting booth.

Outside the polling station, a large contingent of metro police kept watch over the area, which is best known for near daily gang shootings. Southern African Development Community observers were also present.

Hanover Park resident Steven Swartz believes the future is bright. But his vote won’t change the problems in his community, that, he says, can only be done by the people who live here. #ElectionDay #Elections2019 #VOTE19 pic.twitter.com/nEEfuWfmMb

“I voted for Cyril Ramaphosa," said Swartz. "I lost my faith in the ANC with Jacob Zuma, but Cyril Ramaphosa, I’ve always followed him, he was supposed to be president after Nelson Mandela but lost out because of his ethnic background.”

The ANC was corrupt, said Swartz, and he believed Ramaphosa would have a difficult time cleaning it up. But he believed there was corruption in all political systems.

“There aren’t many leaders in South Africa, and that's the problem even in our area,” he said.

Race played an increasingly large part in the election campaign, and not far from Hanover Park residents of the mostly black Siqalo informal settlement have clashed with their mostly coloured neighbours during service delivery protests over the past year.

President Cyril Ramaphosa voted in the 2019 elections and spoke with the media regarding the ANC’s mandate after the elections on May 8 2019.

Various political parties have tried to capitalise on the issue of apartheid spatial design when targeting voter demographics.

“Coloured people forget that there was a time when black people had no jobs but now we are equal and everyone stands an equal chance of getting a job,” said Swartz.

Instead of blaming political parties for the problems in their communities, people needed to take responsibility, he said.

“They can blame the ANC but they should blame themselves as well for the lack of change in this area. I’ve been living here for 49 years so I know what I'm talking about.

“I was born in gangsterism. I have a son who is a gangster, who is in jail, he chose to live that way.

“But there are a lot of people who come from Hanover Park and did something good with their lives. It's your choice to get out of drugs and do something with your life," he said.

A web of "premeditated" killings entwined with the trade in illegal drugs is expected to be revealed when one of the biggest gang trials gets ...
News
2 years ago

Government is 'winning the war' against gangsterism on the Cape Flats, says Ramaphosa

Government is "winning the war" against gangsterism and drug dealing on the violence-plagued Cape Flats in the Western Cape.
Politics
2 years ago

'It's empty, there's no food,' voter tells Ace Magashule, pointing at her fridge