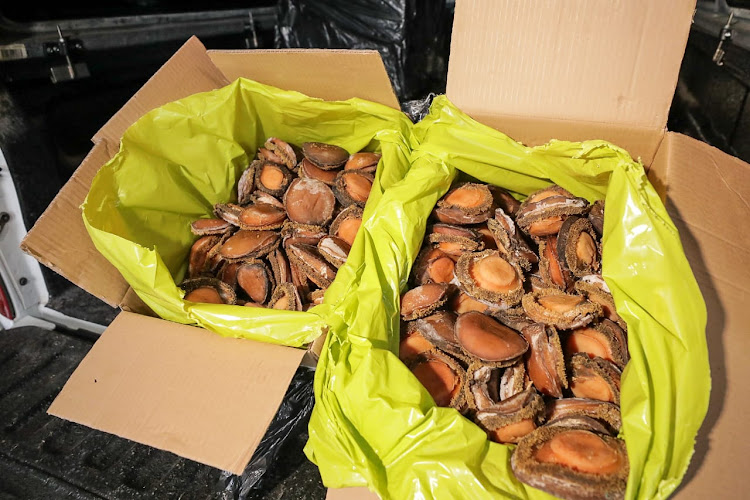 Dried abalone worth R2m was seized by election police in Cape Town on Wednesday.
Image: SAPS

While South Africans cast their votes for a better future, criminals worked hard to destroy it.

Luckily, police patrolling to keep voting stations free of trouble stumbled on a man trying to smuggle abalone worth R2m out of the country.

The Chinese man was arrested on Wednesday when a police patrol spotted him trying to reverse a Ford Ranger out of a warehouse in Bellville, Cape Town.

According to police spokesperson Sgt Noloyiso Rwexana, officers thought the driver appeared suspicious and decided to stop and search his vehicle.

"At about 3.15pm they approached and searched the vehicle, upon which they recovered 16 sealed boxes of dried abalone," she said.

She said the officers then searched the warehouse and found an illegal abalone-processing facility.

Over 13,000 dried abalone found in car in Cape Town

A man has been arrested after he was found in possession of over 13,000 shucked dried abalone in Table View, Cape Town, police said on Sunday.
News
3 years ago

"Various items of equipment, among others a large steel cooking pot, gas cylinders, piping and burners, scales, fans, heaters, drying shelves and also bags of salt, were seized," she said.

The dried weight of the abalone was about 350kg, according to the police. Dried abalone is typically about 10 times lighter than when it is harvested from the ocean, meaning the poachers would have taken 3.5 tons of abalone out of the ocean for this shipment.

Nearly 2,000 tons of SA abalone enters the port of Hong Kong annually. SA fishermen are only allowed a total legal catch of 96 tons a year by the department of agriculture, forestry and fisheries.

According to an Institute for Security Studies report, the illegal abalone trade costs the economy around R628m a year.

In marketplaces in China, poached SA abalone can sell for as much as R5,800 per "catty" (equivalent to 605g).

The 25-year-old was arrested on charges under the Living Marine Resources Act and will appear in Bellville magistrate's court on Friday.

One of the suspects allegedly involved in a massive poaching syndicate with nine department of agriculture, forestry and fisheries anti-poaching ...
News
3 years ago